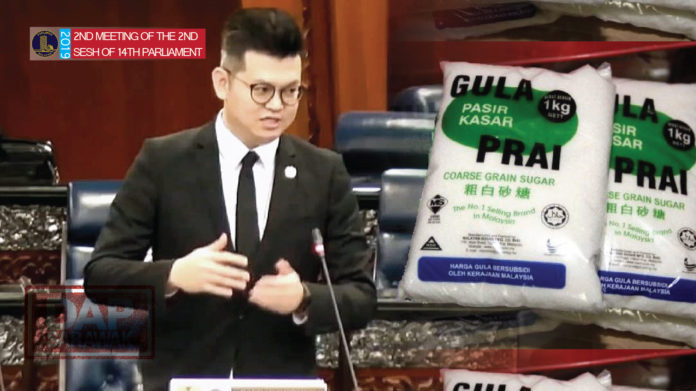 I welcome the Federal Government through the Ministry of Domestic Trade and Consumer Affairs strong efforts in carrying out anti-monopoly actions to promote greater competition in prices and also protect the welfare of the consumers. This was based on a Parliamentary Question put forth to the Ministry on the efforts of Ministry to break any monopolies that is not beneficial to the people.

This is shown through efforts that broke the monopoly of sugar supply in Sarawak where 11 new APs to import refine sugar was given to 11 F&B production company in Sarawak in 2019.

Before this, all the local Sarawak companies have no choice but to purchase their refine sugar from either MSM or CSR at a cost of RM 2.60- RM 2.70 per kg. Now through the efforts the Federal Government, these companies and many other that are also applying can import the sugar directly from other sources at an average of RM 1.50 per kg which help keep the business cost low and avoid prices of products to increase.

On top of that, Malaysian Competition Commission(MyCC), an agency under the Ministry Domestic Trade and Consumer Affairs is part of the Special Inter-ministerial committee to review monopolies in the country’s services and supply chain across various economic sectors chaired by the Minister of Economic Affairs, YB Azmin Ali, and has gave their input on 4 main monopolies in our country which is PUSPAKOM, BERNAS, Pharmaniaga dan MyEG.

Based on Section 10 of Competition Act 2010, MyCC has the authority to investigate any companies that misuse any monopoly or dominant position in the market to directly or indirectly imposing unfair purchase or selling price or other unfair trading conditions.

So far MyCC has investigated few companies on allegations of monopoly including Megasteel, Giga Shipping Sdn Bhd., MyEG Sdn Bhd, DagangNet Sdn Bhd and others. Out of this, MyEG Sdn Bhd has been fined RM 9.4 million for misusing their company position to monopolise the market to renew their “Pas Lawatan Kerja Asing(PLKS)”.

On top of this, the Federal Government through the Ministry of Health also has decided to end their concession with Pharmaniaga which was the sole concessionaire providing logistics and distribution services of medical supplies in our country since 1994 and instead an open tender system will be implemented.

There is still much more to be done, but the Federal Government is taking positive steps in addressing the long-standing issue that is very technical in nature and may involve a lot of legal implication and in some cases high compensations due to the loop-sided contract signed by the previous administration.