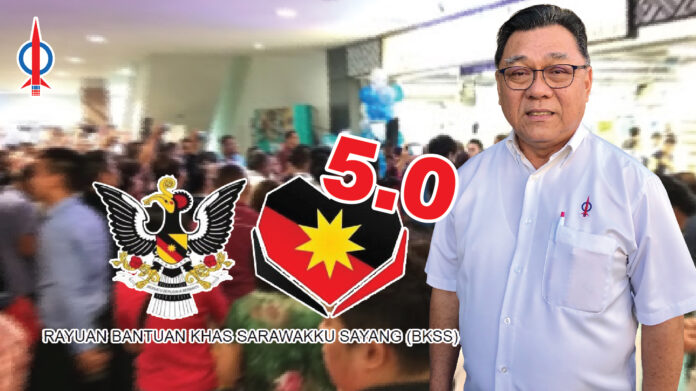 Bantuan Khas Sarawakku Sayang (BKSS) 5.0 special assistance package had been announced recently by the Chief Minister, but it has yet to benefit more of the people in general , especially when the aid has not been paid out yet.

Gabungan Parti Sarawak(GPS) government is often proud of the financial position of Sarawak, said it to be the best and with more than RM20 Billions in reserve. Currently the state is facing pandemic challenges therefore it’s time to make good use of the resources practically, otherwise this can’t be said to be a people oriented government .

With the current outbreak of the pandemic, businesses have decline even more , merchants and workers need financial assistance, the Government should grant more allocations to overcome these tough times, stimulate the economy and drive the Sarawak economy ahead.

Among the 11 measures from special assistant package, 6 of them are discounts, 3 exemptions, and 2 are deferred payment measures.

Because of the pandemic, businesses are taking a downturn, and people’s income are dwindling. There is no extra money on hand to spend. The people in general need assistance also from this package.

Pandemic situation is spreading rapidly, so besides the 11 measures announced , the Sarawak Government should also come out with more practical economic stimulus package, to activate businesses and also to accelerate the economy.

Therefore many businesses and salary workers should also be receiving helps from the Government, but unfortunately they are left out from BKSS5.0.

The BKSS5.0 is set to provide helps for the first half of the year 2021, rather than observing its effectiveness on our economy and only then decided, GPS Government should announce assistant for second half of the year too.

The government must be decisive and forward looking to come up with complete measures and plans to save the economy through a one-time model, not the piecemeal alms, as the current package wouldn’t help much especially when it coupled with the flood situation faced in several areas in Sarawak.

Comparing to the RM300 Billions of Bantuan Prihatin Nasional (BPN) given out by the Pakatan Nasional Government, the amount of RM405 Millions of BKSS5.0 by GPS is merely a little more than 0.1% of the BPN value. BPN is obviously short-lived and not effective. It did not help much to stimulate and sustain the Malaysia economy as our economy is still in weak.