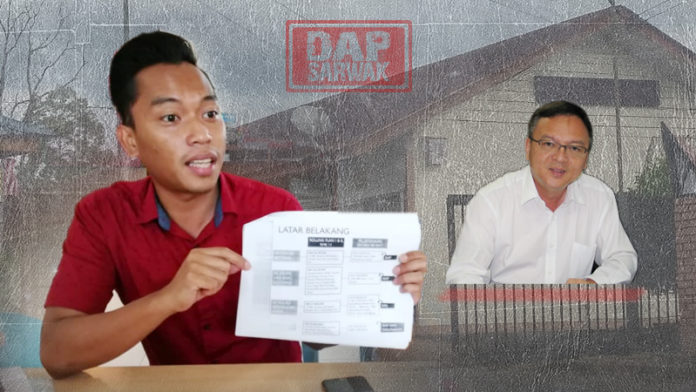 Lo Khere Chiang has been hurling baseless accusations against me and with his wild imagination, he thought I was accusing MPP for not issuing an Occupational Permit (OP) for the newly completed Industrial Built System (IBS) school block for SK Haji Baki. It only Gos to show how ignorant Lo is for not being able to read my statement properly and how one can simply spin and fling untruthful stories around just for the sake of confusing the public in order to gain cheap publicity.

Let me present the real facts of the matter here :

Firstly, this project’s worth was RM26.52 million and was approved by the previous BN regime under 11th Malaysia Plan. However, only a portion amount of RM2.93 million or 11.5% was allocated to build the IBS school block.

Secondly, it was the previous BN regimen via Ministry of Education, for some reason, who appointed a West Malaysian contractor to do the simple job in 2016. If Lo is aware of this issue and has claimed that Sarawak has so many capable contractors, why Didn’t he and Padawan Municipal Council (PMC) not convene an urgent meeting to discuss this matter? Did he write any official letters to the then Minister of Education Dato’ Seri Mahdzir Khalid requesting the ministry to appoint a local contractor? If not, Then Lo has no right to blame the current PH government for the appointment of contractor made by the previous BN regime. It just shows that Lo and SUPP had failed to stand for Sarswakians by putting “Sarawak First”.

Thirdly, I am aware that the project is not yet completed as expected because the contractor did not do a proper job. You don’t need to be a “rocket scientist” to understand this issue. I agree that this was because of the horrendous Performance of the contractor that the consultants are not willing to apply for an OP from PMC. It is malicious for Lo to put words in my mouth by saying I’m accusing PMC for not issuing Occupational Permit (OP). In which part in my I was asking that “if the IBS building has yet to receive OP, why has none of PMC councillors raise this issue?” My question is very simple and Lo just needed to answer either “Yes, They did” or “No, they didn’t”. Why has Lo made his life hard by beating around the bush? I would humbly ask Lo to read into my statement properly.

Forthly, the duty of a local councillor is to review building guidelines, address problems, complaints by members of the public as well as briefings by and meetings with other parties ie contractors. This newly incompleted and poorly constructed IBS school block was so-called completed In 2016. If the PMC councillor is aware of this issue, why can’t they assist the contractors to follow the proper guidelines so that the consultant can apply for OP? If PMC councillor is not aware of this, it shows that GPS appointed councillors That are not effective and efficient in carrying out their duties to the public.

Fifth, Lo should stop showing his jealousy when I took a picture handing over a donation RM5,000 on Chong’s behalf. It shows that DAP can approve an allocation within a short span of time without any delay. This means that DAP-elected reps are More effective and efficient to approve funds in their constituency. Unlike SUPP-elected reps, they tend to delay the fund allocation.

Lastly, under the State Budget 2019, the GPS government had approve a sum of RM81.7 million to be allocated to rebuild, repair and upgrade the dilapidated schools. Instead of pointing fingers at the current PH government due to the failure made by the previous BN regime, why can’t Lo secure some fund from the state government for PMC to develop schools within their jurisdiction? Is Lo afraid to be seen by against the PBB hegemony in the state?

I urge Lo and PMC to settle this issue immediately. Failure for PMC councillor to assist the contractor to obtain OP through a proper guideline poses imminent danger to our students and teachers. Do not risk the safety and lives of the students.