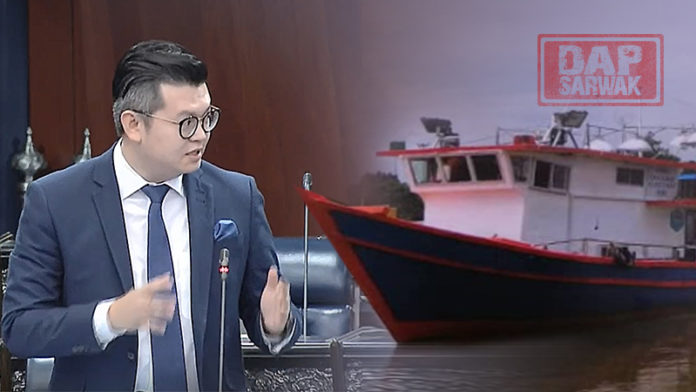 The Federal Minister of Agriculture YB Dato’ Haji Salahuddin bin Ayub today has given his assurance that all efforts are being done to secure the release of our Malaysian fishing boats including those from Sarawak that was intercepted by the Indonesian authorities for the past few months. The Minister has made contact with Indonesian Minister of Maritime Affairs and Fisheries Susi Pudjiastuti and for an official meeting in Jakarta to negotiate the release and also to seek a way forward to settle this long standing issue including official stand on the disputed waters.

This was in response to a question I raised up this morning in Parliament during the Ministerial Questioning time, regarding the increasing cases of our Malaysian fisherman boats that are being caught and confiscated by the Indonesian authorities including the 2 recent case of a tourist fishing boat named Nemo and another fishing boat registered as SF1_66 from Sarawak that was intercepted on 12th March 2019 and 13th March 2019 respectively.

Both these boats were said to have encroached into Indonesia waters even though the coordinates provided by both boats at point of arrest were said to be within our Malaysian waters. I was informed that actually the Malaysian and Indonesian government have signed a Memorandum of Understanding(MoU) on November 2017 in Kuching. This MoU states that there is an understanding that any fisherman that is being caught will be released swiftly as majority of such cases was done unintentionally especially due to the confusion of our maritime borders. Both countries have agreed that most of the fishermen involved are also from the lower socio-economic status that are fully relying on their fishing activities. That is why they should be released swiftly including their boats and fishing equipment.

The Minister went on to elaborate that there are currently also disputed waters at the border of Malaysia-Indonesia where both countries may have different interpretation of our borders. On top of that, due to political developments in Indonesia, the frequency of arrest of these fishing boats have also increased in view of the upcoming Indonesian Elections.

This issue has been ongoing for many years and actually involved multiple Ministry including Ministry of Agriculture, Ministry of Defence, Home Ministry, and Foreign Ministry. That is why I suggested in Parliament to the Minister that the federal government should establish a taskforce on the Cabinet level for higher level direct negotiations with the Indonesian government to resolve any disputes especially on our maritime borders and how we can protect and uphold the rights and security of our Malaysian fisherman.

I highly appreciate all the efforts of all the relevant federal ministries and hopefully this issue can be resolved as soon as possible and our fellow Malaysians and boats be brought back to our country.