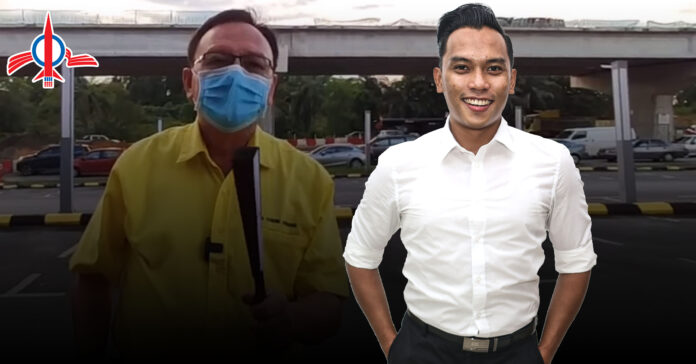 As I have expected, Padawan Municipal Council (“MPP”) Lo Khere Chiang would beating around the bush and rather not directly answering my simple questions pertaining on the traffic congestion along 6th Mile Jalan Penrissen.

As usual, Lo would resort to answering my questions by shifting the blame to Pakatan Harapan (“PH”). He posted his lame propaganda video accusing me of being ignorant or plain stupid. As a leader, Lo should be more gentleman and not to stoop so low by playing such rhetoric and propaganda. Such rhetorical and propaganda statement by Lo does not bring any progress or betterment to the society.

For this press statement, I would like to humbly ask Lo with few questions that do not require him to crack his brain to answering me.

It is like a wife asking her husband “what time are you coming home” and the husband answer “it’s raining” (the wife is asking about the time, not the weather condition, where in fact, the husband was cheating on the wife)

Lo’s bragging on his so-called ‘progress’

Secondly, in Lo’s press statement dated on 26-10-2021, paragraph 2, he bragged that he has been continuously monitoring the Pan-Borneo Highway project, including the 7th Mile and 10th Mile viaduct construction to Penrissen Road. My simple question to Lo:

Lo even continue to say that he has been continuously communicate with JKR Sarawak and the contractors. My simple question to Lo:

Thirdly, at paragraph 4 of Lo’s press statement, he “hoped that the people will be patient and tolerant”. The major remedial works for slope failure at the junction of Kpg Haji junction along Jalan Kuching-Bau is expected to be completed in eight months, hence, leaving the road users with no alternative. Then, instead of completing the construction of the flyover at 6th Mile, the contractors decided to temporarily close the traffic junction, thus, again, leaving the road users with no alternative but to face the traffic congestion day and night.

Fourthly, at the same paragraph of his press statement, Lo claimed that “the project has been rushed day and night”.

I have been moving around that area especially during night time and I can guarantee him that his claimed contradicts with the reality. Even those who stay within that area can agree with me on this. If what his claim is true, I would like to challenge Lo to be transparent the public by showing the contractual terms and conditions that has been signed and agreed upon between the appointed contractors with JKR Sarawak.

I strongly urge Lo to use his brain and think outside of the box on how to solve the traffic congestions along Jalan Penrissen without resorting to lame rhetoric and propaganda. It is time for Lo to stop beating around the bush and start to be more serious in fulfilling his duty as a state elected representative. If he can’t stand the heat, get out from the kitchen. As such, I will continue to firmly hold Lo accountable to the public without fear.

How Did Sabah And Sarawak Change Its Status To Merely 12th And 13th States Within The Federation Of Malaysia?