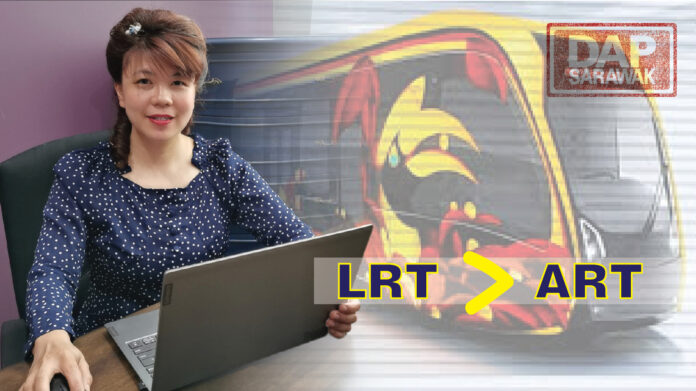 The Sarawak State Government had in September, 2019 announced that the Autonomous Rail Transit (ART) is expected to be operational in year 2022. However, the targeted operational date was further postponed to Year 2025 as announced by the Chief Minister in the beginning of this year. Based on this fact alone, given the state government keeps delaying the targeted ART operational date, it is doubtful if the state government has carried out any thorough and in depth study before the State Government decided to make an announcement to replace the Light Rail Transit (LRT) project with ART.

It is a well known fact that the ART is a system that has never been proven successful in any country apart from being expensive and costly to maintain. So far, there is only one supplier for the ART system which is from China and hence resulting in high maintainance cost. Just like the three hydrogen buses project which faces many technical issues, the Sarawak State Government is adopting the China technology for the ART too.

While opting for ART for our state’s public transport system may sound sophisticated, but up till todate, the Sarawak State Government has not made any frank disclosure about it.

We have not seen any proposed master plan about the ART project being released by the state government. I believe many are asking for the plan but somehow up till now it is still unavailable. The people are kept in the dark about the location of the ART stations, the actual route of the ART lines and the amount of money to be spent in implementing this ART project. How much have been spent so far by the state? Are the ART runs on petrol or hydrogen? Which company is being awarded for this ART project? How effective will this ART project going to benefit the people? How much is the state government going to subsidize Sarawak Economic Development Corporation (SEDC) yearly when the ART Project comes into full operation? What is the proposed fare for the public to use the ART service?

Unless and until the Sarawak Government makes a frank and full disclosure on the ART project to all Sarawakians, the State Government should not use the tax payers’ money to bulldoze over a project which is full with uncertainties.

We do not want our state government to continue spending the taxpayers’ money by implementing projects which may only sound good in the ears and to just satisfy the ego of the few but impractical to solve the public’s woes at all. Otherwise, the ART project will end up to become another white elephant project.