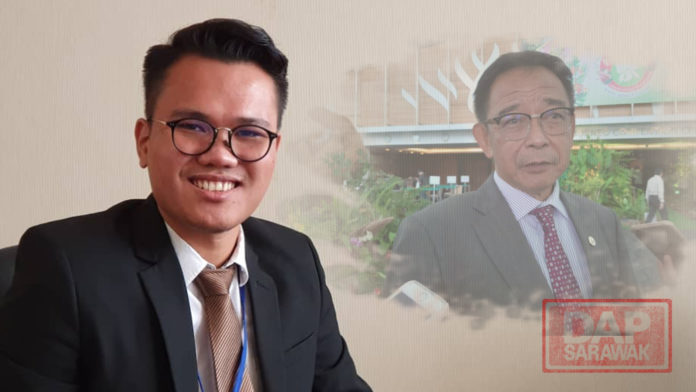 It is funny as Abdul Karim a minister from GPS coalition labeled the MPKK supporter at Rumah Panjai and Kampung as betrayal for Sarawak. This remark let the Sarawakians see and judge whether the GPS reps are the one that they want to be their government.

Where is your Sarawak first slogan? Why are you labeling the MPKK supporters as the betrayal of Sarawak? Is your slogan only valid for those who support GPS only or the GPS actually does not have the intention to fight for Sarawak but only for their political survival? Are not YB Juanda said the GPS government is cool and did not afraid to Pakatan Harapan? But what you delivered in DUN shows that your time is up, enough is enough!

GPS forgot that they are actually part of the previous that causes a lot of mess that the Pakatan Harapan is currently on the process to clean it up. The Sarawakians supposedly enjoyed a lot of benefits when they are part of Barisan Nasional back then and yet after decades, Sarawak is left behind.

They said the MPKK supporters are betrayal for Sarawak, but when the tabling of Petroleum act 1974 by the very own Sarawakian who is also their former leader, they are not even against it and have been mums for it for decades and just the Barisan Nasional lost the recent General election, then they said it is not valid as the Petroleum is null and not valid as the Sarawak state assembly never approve it. But we see during the August house of DUN sitting, we never heard that they are saying that the act that was approved in parliament 1974 was null, if the act is really null and not valid, they should table a motion in DUN so that all the lawmakers push the parliament to cancel the act
but yet we never heard a word from them.

In 1976, when the amendment of federal constitution 1976 tp downgrade, once again they are quit and did not do anything to reject the amendment. They have 43 years to reject and voice out the concern of Sarawakians yet they have done nothing. When the Pakatan Harapan trying to amend back the federal constitution back early this year, yet they abstained and did not vote, are not this is the first step for us to restore our status?

When many companies linked to cronies, land being grabbed by tycoons who are closed to GPS government, they are quiet and say nothing. If they really walk the Sarawak First slogan, they must provide a fair position to all Sarawakians in government sectors, and not focus to certain races. When still a lot Sarawakians did not receive basic infrastructure, they mums and only focus on certain parts of Pakatan Harapan promises when Pakatan Harapan in just 18 months already achieved 53 of their promises and they totally forget that part.

After more decades of our State legislative, we never experience any speech made the opposition backbencher being expunged from the Hansard. if GPS is really a savior for the Sarawakians, why are you so afraid that you expunged the speech from Hansard? GPS reps must stop using Dewan Undangan Negri as a place to bully the Pakatan Harapan lawmakers, and they must respect the house if you guys are not the betrayal of the Sarawakians.