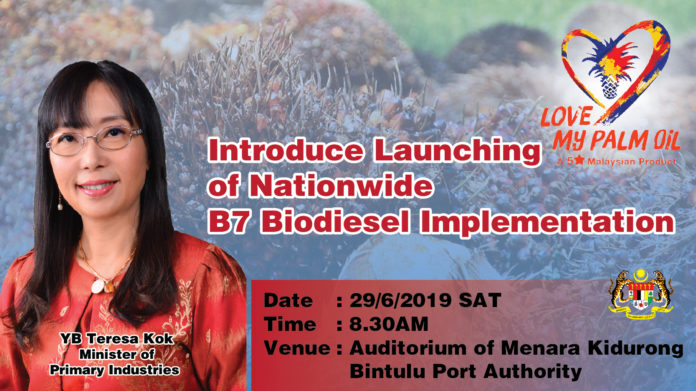 The Minister of Primary Industries, YB Teresa Kok is coming to Bintulu on this Saturday (29th) to launch the nationwide B7 biodiesel implementation for the industrial sector.

The event will start at 8.30am and the venue is on the ground floor, Auditorium of Menara Kidurong, Bintulu Port Authority at Tanjung Kidurong. The event is open free to the public and the related industries, said Chiew Chan Yew, the chief publicity officer of the minister’s visit preparation team.

Chiew pointed out that as our country produce palm oil and base on research results, palm oil is suitable for biodiesel as one of its ingredient.

Therefore, it should be promoted to the related industries chain to bring long term stability to the demand in our palm oil.

“The use of crude palm oil must be oriented towards sustainable development of the primary industry in our country, so that we will not over-rely on exports only to support the industry, but also to enhance its value through more scientific research development, in order to contain the risks of fluctuating international prices.”

Besides, it will further enriche the country’s primary industry and creates more job opportunities, and more talents to be trained at the same time to conform to the rising era of the industrial revolution 4.0, which is also the driving force of becoming an advanced country, he added.

Chiew said that the B7 biodiesel is a mixture blend of 7% palm methyl ester and 93% petroleum diesel. The government had decided to introduce its launching in the industrial sector from 1st July this year.

“The primary industries take a significant role in the economy of our country, as the palm oil itself contributes 5% of GDP. The portfolios under the ministry of primary industries include palm, oil, rubber, wood, cocoa, pepper, kenaf and tobacco, from upstream activities to downstream manufacturing from local to international issues. “

Chiew also stressed that the performance of every aspect of the primary industries has been YB Teresa’s top priority. Despite ongoing challenges, including volatile commodities prices especially the depressed crude palm oil prices, the minister and her department have implemented various effective strategies to stabilise and strengthen the country’s primary industries sector. She has also been proactive and put in relentless effort in expanding the export volume, with ongoing meetings, dialogues with the trading partners and group at international level to promote the industries opportunities.