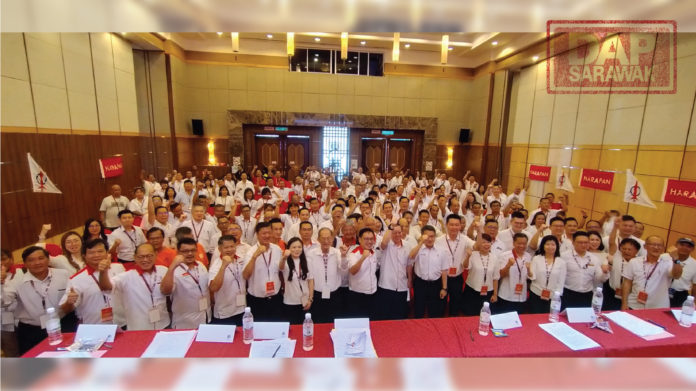 The past one year has been a very challenging year and trying time for us DAP and the Pakatan Harapan in general.

•Economically, we are caught in the US-China trade war and the general global economy downward trend.
•Politically, DAP is made the bogeyman in the racial politics played up by the UMNO-PAS-PBB coalition, when even an innocent comic book can become a sensitive issue and attracts the ban order from the Ministry of Home Affairs.
•Socially, racial polarisation continues to dominate. To the Malays, the Pakatan Harapan (PH) Government is under the control of DAP. To the Chinese, the PH Government is under the sole control of Tun Mahathir and DAP has no decision-making power.

In May 2018, the people of Malaysia has supported us to form the Federal Government to institute reforms and to clean up the country. We have fulfilled many of our promises. Undeniably, there are still some of our promises remain unfulfilled.

In the past 17 months, we have achieved a lot. I will just highlight 22 of the major achievements or reforms that we the PH Government has implemented in such a short time of governing, and with the tight financial constraint of huge debt and very polarised racial sentiment that we inherited from the 55 years of Barisan Nasional (BN) government.

1.The Prime Minister no longer holds the Finance Minister post. This has provided an internal check and balance mechanism within the Federal Government and prevented future abuse and misappropriation of public fund the likes of SRC and 1MDB scandals.

2.A non-Muslim was appointed to and a woman now holds the appointment of Chief Justice of the country. This is unprecedented as in the past, only Muslim males held the post.

3.A non-Muslim was appointed as the Attorney-General of the country. This is also unprecedented.

4.The Opposition Member of Parliament is appointed as the chairperson of the Parliament’s Public Accounts Committee (PAC) to decide on the agenda of the enquiry and investigation to be carried out on all Ministries’ policies, projects and programs. This will provide a more effective and stringent check and balance on the Executive.

5.The off-balance sheet budgeting practice has been replaced with more transparent financial reporting of the Federal Government’s accounts to give a true and fair representation of the Government’s financial position. Such transparency in financial account reporting practices puts our country in a stronger position in the eyes of the international financial market.

7.The abolition of Goods and Services Tax (GST) which gives many businesses a relief from the hardship associated with the GST system.

8.The full refund of RM37 billion in GST and income tax which was wrongfully withheld by the previous BN Government for years.

10.Our Gross Domestic Product (GDP) growth for the first and second quarters of 2019 were 4.5% and 4.9% respectively which has outperformed all our neighbouring countries. Our approved Foreign Direct Investment (FDI) in the first half of 2019 rose by 97% to RM49.5 billion as compared to the 1st half of 2018 which was only RM25.1 billion.

11.The implementation of open tender system for most projects thus reducing the chances for corruption in government procurement processes.

14.Successfully tracing the money trail of 1MDB thus resulting in the return of a total sum of RM1.45 billion from the embezzled 1MDB fund. There are still ongoing efforts to trace the other embezzled fund of 1MDB.

15.Providing free healthcare protection scheme PeKa B40 to the low-income B40 BSH recipients aged 50 years old and above which includes up to RM20,000 worth of medical services. In 2020, the benefit will be extended to those B40 BSH recipients aged 40 and above. In addition, there is also the free MySalam Takaful insurance program for the B40 and in year 2020, all those earning below RM100,000 annual income will also be covered by the MySalam Takaful program.

16.Introducing the Independent Police Complaint and Misconduct Bill (IPCMC) in Parliament which is currently under thorough study by the Parliamentary Select Committee before the Bill is re-produced for approval in Parliament. This Bill, once implemented, shall have a great impact to improve the professionalism, integrity and credibility of the Police Force while protecting the normal citizens from police abuse.

18.Compulsory assets declaration by all cabinet ministers, deputy ministers and members of Parliament to make all elected representatives accountable to public scrutiny.

By comparison, BN’s 55 years rule of the country has given rise to over 1000 dilapidated schools in Sarawak. Najib’s promise to allocate RM1 billion in 2018 for these schools was mere lip service with no actual fund disbursed. Otherwise, he would have done so during the first 5 months of 2018 when he was still the Prime Minister.

21.Health and Education Ministry getting biggest budget in history of Malaysia showing that the PH Government is putting focus on the right things to build the future of our country and health of our people. One of things, for the first time in history, we are providing free pneumococcal vaccination to babies (approximately RM1,200 per child in private) that could eventually save 500-700 lives a year.

22.Proposed Construction of Trans Borneo Highway, a complete network of highways in Borneo linking the most remote areas in Sarawak to Sabah and then on to Kalimantan, where the new Indonesian capital will be located. It would not only complete the loop of highways around Borneo but also bring socio-economic benefits and physical development to more than 100,000 people there. (RM 600 million in Budget 2020)

The above 22 achievements or reforms implemented in the short 17 months are not an exhaustive list of our reforms. There are many more.

We were voted in to govern for 5 years. We are only in the 17th month. There is another 3 and a half years to go. I am confident that as time goes by, the Opposition will have less songs to sing while we have more fulfilled promises to showcase.

In Sarawak, we will face the mother of all State elections in one year or one and a half year. Never in the history of the Sarawak’s ruling coalition going into a State Elections against the ruling party of the federal Government. The Election Commissions, the armed forces, the Police and the Federal civil servants are no longer under the dictate of the GPS.

As such, we must all work towards winning the coming State Elections. To do that, all members must do the followings:

1.Stay united and focus on the Party’s agenda to move forward as the Government;

3.Help the Federal Government agencies to roll out and implement all the projects and programs that are beneficial to the People of Sarawak; and

4.Counter the fake news spread by the GPS’ cybertroopers and their smearing campaign with our positive campaign based on facts and figures. To do that, our members must be equipped with the knowledge and information of all Federal Government’s initiatives to help the people.

We are now fighting an injured beast in GPS, injured in the sense that they no longer have the Federal Government machineries to help them win elections. Whilst an injured beast may be weaker in strength, it is also most dangerous and vicious in its fighting back.

This constant sabotaging and antagonistic manner of the GPS against the Federal Government will do no good to the welfare of Sarawakians. They are done for the personal political interest of the GPS leaders at the expense of the People of Sarawak.

As such, for the sake of Sarawak and our people, we must change the present Sarawak State Government. Afterall, the GPS leaders and their gang have governed Sarawak for more than 50 years and despite the RM31 billion reserves boasted by GPS, majority Sarawakians remain poor and many rural areas remain undeveloped while our trees continued to be chopped down and our land taken to enrich the few GPS cronies.