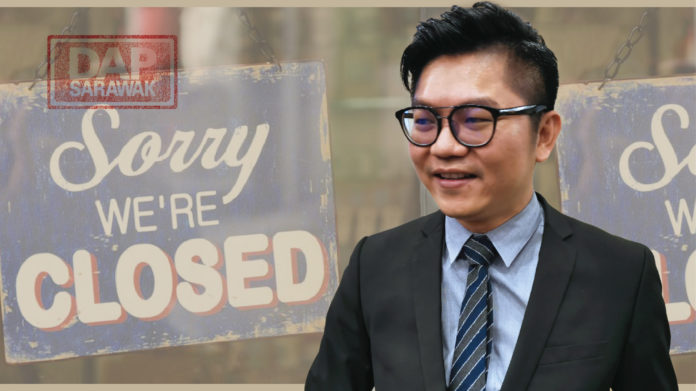 KUCHING: Not only are small and medium enterprises (SMEs) left out of the Prihatin Rakyat Economic Stimulus Package but their situation is aggravated by other assistances by the government, said Padungan assemblyman Wong King Wei.

He said employers were prohibited from imposing unpaid leave on employees but expected to pay full salaries to their employees while most of these employees are getting financial assistance under the B40 and M40 group.

“Under the Movement Control Order (MCO), the majority of businesses are rendered to almost zero revenue and many of these businesses are getting 80 per cent to 90 per cent lesser revenue,” he said.

Wong pointed out that while they were rendered zero revenue, they had been asked to assist the government to maintain the income of the employees.

“Now, who is going to help the employers then?”

He said there were nearly one million SMEs in Malaysia, contributing about 38 per cent of the gross domestic product (GDP) of the country.

He added that SMEs had been termed as the “economy back-bone” to the country.

“There are predictions of US economists that this pandemic will see the unemployment rate hitting as high as 32 per cent in US.

“I don’t think Malaysia can escape from any lower percentage than that if the SMEs are not rendered help by the government,” he cautioned.

He said the condition for employers to be qualified for the RM600 assistance in paying the employees was rather unpractical.

He felt that not many employers would qualify for that and that government should be more sincere in helping the business sector.

He pointed out that the Sarawak state government, having reserve fund of RM31 billion, should reach out to the SMEs in the state.

“It is the right time to use part of the fund. Reserve fund is meant emergency use and for the common benefit Sarawakians.

“We DAP Sarawak has proposed that the state government bear 50 per cent of the employees salary for six months, to help, especially the SMEs in the state to wade through this difficult time and to revive the businesses.”

Wong stressed that helping employers to help the employees was helping to ensure the sustainability of the state’s economy.

He added that this was the time for political secretaries to the chief minister to raise this matter so as to help the SMEs in Sarawak, and they are 32 of them.