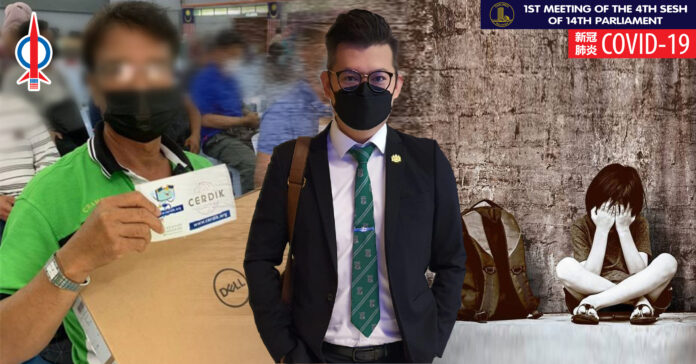 The Federal Government’s CERDIK initiative that was announced in last year’s Budget 2021 to provide digital access for home-based learning (PdPR) by providing free laptops to at least 150,000 students from B40 families across the country has clearly failed at the expense of many poor students all around the country.

As a result, many of them will be left behind and find difficulties catching up once school reopen, and this may widen the education gap between the poor and the rich and those in urban and rural areas.

Not only was the 150, 000 laptop delivered very late, but it is clearly insufficient to address the urgent needs of students that need such laptops to follow the home-based learning. As of 25th September 2021), there is still 33,264 units of laptops and tablets that have yet to be delivered even though this initiative was announced in November 2020.

Because of this delay, many of these 150,000 students on top of many other students who do not have proper gadgets or even internet connection, have missed out more than a year worth of school education.

In fact, there are a total of 11 government secondary schools (SMK), 25 primary (SK) and 9 government Chinese assisted schools (SJKc) in the constituency of Bandar Kuching. However, based on the answer I obtained from Parliament, only 1 secondary school was provided with all the 92 gadgets. This is clearly not only not fair for the other schools, but more important the total is severely insufficient to cover the needs of the poor students in Bandar Kuching.

Such distributions must be fair and there should not ever be any possible political considerations when delivering such laptops even to opposition constituencies.

That is why I urge the government to distribute much more laptops and gadgets for the students in Bandar Kuching. They must also answer what are their plans for the other schools in my constituency and are they qualified to also receive laptops and gadgets under this CERDIK initiative. If so, and they have yet to receive, what are the procedures for them to apply as I am sure there are needy students in every school that do not have a proper computer.

Some families may only have one gadget which may belong to one of their parents. In many cases, the parents need it for their work and their children can only use them after work and will miss out on classes. Some with only 1 gadget, as they cannot share, some siblings may missed out as each child mayrequire their own laptop or gadget to follow with their own class lessons.

In June 2020, the Sarawak State Education Minister even mentioned that more than 50% of students in Sarawak have no internet access or electronic device to follow online learning at home after schools closed. Since that statement more than 1 year ago, not much was done by the both the Federal and State Government to help address this big problem faced by parents and children who continues to lose out due to online learning.

This is happening not just in the rural areas of Sarawak, but also among the urban poor. Once school reopens, many will lose interest to study eventually drop out, continuing the cycle of poverty in their families.

This issue must be dealt with greater urgency as these “lost generations” could not afford to lose any more months on their studies especially since the Covid-19 cases is still high especially here in Sarawak. This is important for the future and education of our children.