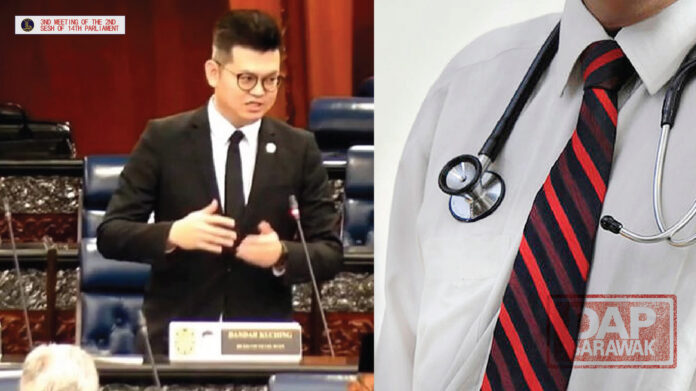 I urge the Ministry of Health and the Public Service Department (PSD/JPA) to swiftly implement without any more delays the upgrade of Medical officers and Healthcare workers under contract from the current UD41 to UD43 has been agreed by the Cabinet under the Pakatan Harapan government since November 2019.

It is not fair for these healthcare workers as they carry out the same responsibility, same workload, and even face the same risk of exposure to any infectious disease including Covid-19, but they are treated differently and not given equal pay grade enjoyed by permanent Medical Officers that enjoy a UD44 grade.

The pay-grade upgrade to UD43 and recognition of the importance of all healthcare workers was agreed upon more than 9 months ago in cabinet but until now, not only it has not been implemented, but on top of that, recently, based on a Parliamentary anwer from the Ministry of Health, the decision by Pakatan Harapan last year to appoint contract medical officers on the UD43 grade will be reviewed by the Perikatan Nasional government again in August.

Today I stood up in Parliament to question the YB Dr Adham Baba the Health Minister on why was this decision delayed and was to be reviewed again?

This is unfair for all these contract healthcare workers that were working hard, sacrificing and serving committedly even during this Covid-19 pandemic and is this how the government shows appreciation to them?

The Minister did not answer the question properly and did not give a reason on the delay and the decision to review the decision that was agreed upon by the PH government.

While I welcome the statement by the Minister that they are recommending an extension of the duration of the contract to allow them to apply and finish their specialisation program especially through “parallel-pathways”, but when I questioned on how many years extra are they extending the contracts and what is the timeline for this to be implemented, the Minister did not give a proper answer again.

Based on official Ministry statistics, only 3.3 per cent, or 665 doctors, of 19,909 contract medical officers were given permanent positions in the public sector as of July 31 this year. That means, almost 97% of our medical officers are getting not just a lower grade, but also do not enjoy other fascilities including unpaid-leave facilities, certain hazard leaves and also HLP to further their specialisation in Local University in comparison to thos under permanent post even though their responsibility and workload in the same.

On top of that none of the UD41 medical officers, whose contracts were extended for six months in 2020, received permanent appointments.

In April of this year already, I mentioned that the 6 months contract is only a “stop-gap measure”, or a short-term fix to the problem, without giving proper assurance and security to Malaysian health care workers. And now these workers including some from Sarawak have no choice to find work elsewhere even though they want to serve the government especially in the government hospitals where more than 70% of the Malaysian population goes.

While I recognise this is a complicate issue, but it is sad how these young doctors and healthcare workers are treated like “disposals” even though they have given so much and serve through during the Covid-19 season.

That is why I urge the government to quickly address this issue swiftly, follow along the decision made by the PH government and show our appreciation to our healthcare workers. They also need security in their workplace and a way to upgrade to their specialisation, as they cannot just live on or eat all the praises and appreciation, we have given them during this period.