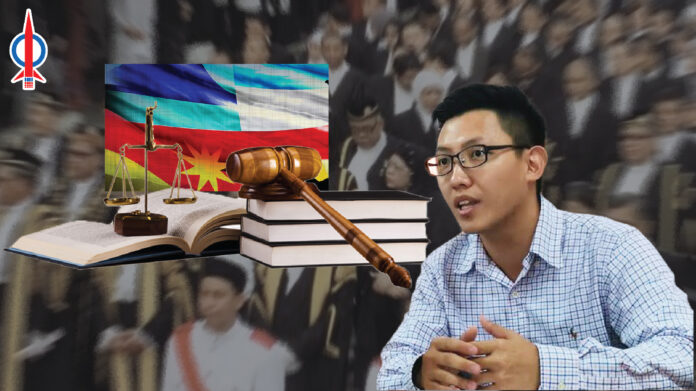 Tnay Li Ping should not politicise the issue respecting the admission of Tan Sri Richard Malanjum who was the former Chief Judge of Sabah and Sarawak (CJSS) for approximately 12 years and also at one point of time the Chief Justice of Malaysia. Throughout his tenure as the CJSS, the principal registry office of the High Court in Sabah and Sarawak was at Kuching.

(a) He has been born in Sarawak;
(b) He has been ordinarily resident in Sarawak for a continuous period of 5 years or more; or
(c) Satisfies the Chief Judge that he is, at the time when the question whether he has
Sarawak connections is relevant, domiciled in Sarawak.

The legal presumption of the deeming provision in Section 2(2) of the Advocates Ordinance is not exhaustive. There are other factors which the court may look into before deciding whether such a person is eligible to be admitted as an advocate in Sarawak. In the present case besides being CJSS with its principle registry in Kuching, Tan Sri Richard Malanjum was granted permanent residency in Sarawak in 2016. During the hearing of admission of Tan Sri Richard Malanjum, there was also no objection from our State Attorney General and Advocates Association of Sarawak. If indeed there was no Sarawak connection, surely at the very least the State Attorney General would have objected to the petition for admission.

I also stressed that the law of admission as an advocates was passed by the BN government which is the GPS now. If Tnay Li Ping has any issue with the law, she should bring this matter to SUPP and GPS law maker.

Therefore, I urged that Tnay Li Ping to stop commenting on the issue and showcase herself as very learned in this aspect of the law. Likewise, Tnay Li Ping should not be politicising the admission of Tan Sri Richard Malanjum to the Sarawak Bar especially when this matter had already been decided by the current Chief Justice of Sabah and Sarawak.

BKSS 5.0 Hardly Address The Hard Time For B40

Focus on the fight of Covid-19, Not Billions Ringgits of Wall

SDMC Urged Not To Implement SOP To Convenience The VVIPs