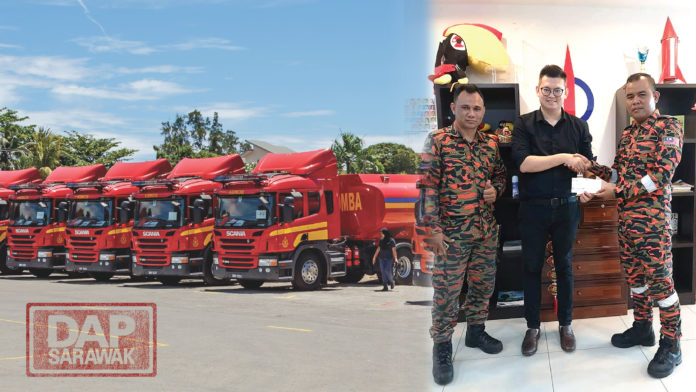 To show our deep appreciation to our firemen , i allocated a contribution of RM 5000 to the Kelab Rekreasi & Kebajikan Kakitangan Bomba Zon Kuching for all the sacrifice, hard work and efforts especially in putting their bodies on thenline to control and put out multiple peat fires all around duringthe haze season.

Our men in orange worked hard day and night in hazardous conditions to help fight and control foredt, peat and bush fires for not just days, but many weeks and in some places such efforts are still ongoing.

They had to brave the thick smoke, intense heat and sleepless nights just to help address the issue. I was shown pictures of all their efforts including they hosting each other and setting up of a temporary pool at the scene for the firemen to dip in to cool down due to the intense heat.

Even with all their training, they are human too who grow weary and tired due to the intensity of the job, that is why we all must not just lend them our support but also a lending hand, by stopping open burnings especially during dry seasons where the fire can very quickly spread and get uncontrollable.

The best way to fight fire is still to prevent it and we all play our part. Now that the peak haze season has passed, they are now preparing for the monsoon season and have started carrying out their operations to monitor low-lying areas that are prone to flooding all around Kuching.

That is why i hope the little contribution we made to them will hopefully help them with some of their welfare needs and even activities to appreciate all that they to protect and help the community.