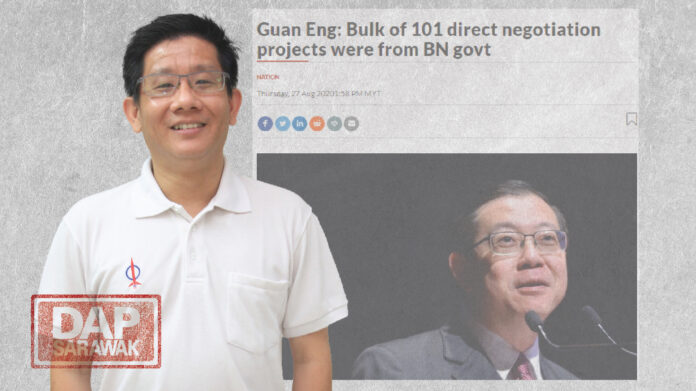 SUPP Youth Chief Michael Tiang’s questioned the 101 projects (6.61 billion) directly awarded during PH time; in the same spirit, the similar question should also be directed to those projects given through direct tender under Barisan Nasional (BN) and Perikatan Nasional (PN).

It is now clear that of the RM6.61 billion, RM6.28billion were direct awards given during BN time which PH had no choice but to continue with it or take over. The actual amount awarded under PH was only around 32 million or 0.07% of the total government procurement under PH. This also means that a staggering 99.93% of total PH government procurement as offered through tender.

It is with GPS hence SUPP support that the rakyat saw the returning of UMNO, will Michael Tiang having the same guts to question:

1) Those ministers previously defected PH and now becoming the PN ministers to give an explanation on the direct awards?

2) Projects that were directly awarded during BN time from 2013-2018 where GPS and SUPP were part of the coalition then. Already there were 12 projects or RM139.3 billion identified and the list is still building up.

3) More closer to the heart is perhaps the 1.25 billion solar project for Sarawak rural school. Until now, Sarawakian still in the dark on the project which was intended to benefit 369 schools in Sarawak rural areas. Perhaps SUPP Michael Tiang with the same spirit can shed us some light? How GPS, which was then under BN and supposed to safeguard the interest of Sarawakian overlook this? Imagine how much we Sarawakian had lost out with the RM1.25 billion which supposed to benefit the rural area? During a high court trial, the witness in the corruption trial revealed that the former prime minister’s wife Datin Seri Rosmah Mansor demanded a 15 percent cut or RM187.5 million for herself.

GPS had previously said that they supported the current government for stability, yet UMNO and PAS are the very elements that rakyat rejected in favour of a clean and progressive PH government. It is with GPS support that the rakyat saw the returning of kleptocracy government, a betrayal and abandonment of the mandate given by the rakyat.