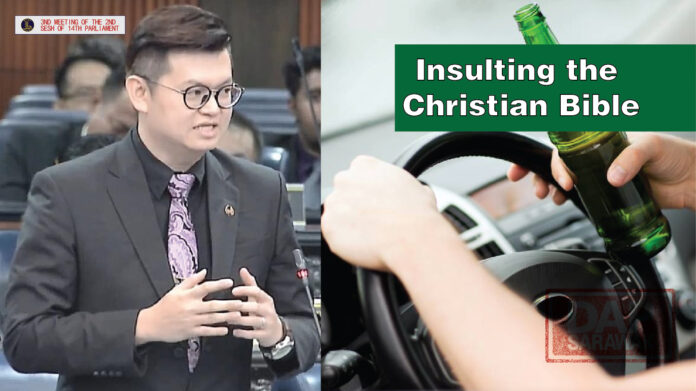 It is regrettable that the Member of Parliament from Pasir Puteh, YB DR. NIK MUHAMMAD ZAWAWI BIN HAJI SALLEH resorted to make insensitive statements against other religion in Parliament during his debate on the The Road Transport (Amendment) Bill 2020, which will see an increase in penalties for those driving under the influence of alcohol.

The MP from PAS made a statement saying that the “kitab injil” or the Bible in Christianity has been “changed” or “distorted” in trying to prove his point that all religion including Christianity bans the drinking of alcohol.

Not only was his understanding of other religion incorrect and flawed, but he resorted to cross the line to insult the Bible which is something that is sacred to the Christian community. I feel this is unacceptable and while I respect the rights of anyone to their own opinion, but they should not cross the line and insult the religion of other that may cause unnecessary understanding and even tension among the different races and religion in our pluralistic country.

That is why yesterday in Parliament I stood up to raise Standing Order 36(10)(c) to bring to the attention of the Speaker of the insensitive statement made by YB Pasir Puteh(PAS) and regret the Speaker then did not stop him from making the remark during the debate itself.

While we strongly believe Christians in general will not react, rebel or create tension even with this insensitive remark, but it is important we set a proper precedent on this and do not let this this go without proper rectifications.

That is why i asked the Speaker to make a ruling to compel YB Pasir Puteh to not only retract that statement in Parliament, but also make an open apology not to just Christians all around the country, but also people of other faith as he should have been responsible not to make any disrespectful comments against any other religion. I also wrote in an official letter to the Speaker for him to make a ruling on the matter latest by the next Parliamentary sitting at the end of the year.

In Malaysia, especially in Sarawak, even though we have a majority population who are Christians, but we all live in harmony and tolerance even with people of different race, religion and background. That sense of harmony is there due to the respect we have of one another and also not to cross the line to make insensitive comments against one another.

I believe political leaders must take lead and set an example, to promote tolerance instead division among all race & religion. That is why I highly regret that the MP from PAS chose to play on such religious sentiments and thus we all should keep him accountable and demand an apology and for him and others to not make such statements again to avoid any unnecessary misunderstanding or tension among our multiracial and multireligious society