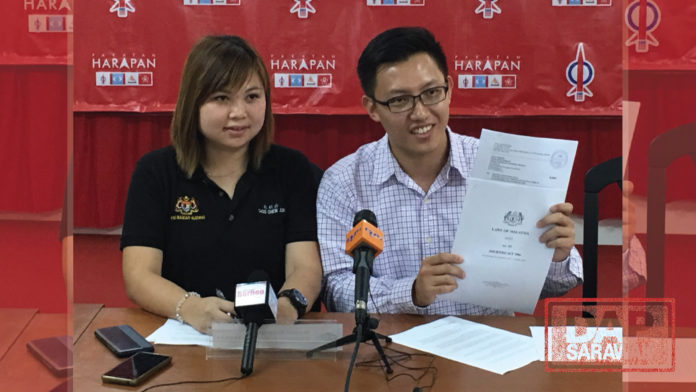 In respect of the admission by SUPP of having received money from 1MDB, DAPSY Kuching has lodged a complaint to Registrar of Society for further investigation against SUPP.

2 weeks ago, MACC has revealed a list of 41 recipients which consists of individuals, NGO, Societies, Companies and political parties having received 1MDB money from Najib. MACC Chief Commissioner Latheefa Koya has also announced that MACC has filed civil forfeiture against the 41 recipients. Supp is one of the 41 recipients.

SUPP President has also admitted that SUPP did received the money from 1MDB in the year 2013. The admission itself is sufficient to prove that SUPP has involved themselves in keeping the illicit money from 1MDB.

It is well-known to everyone that 1MDB is hitherto the biggest money laundering scandal in the world. knowing that it is illegal yet, SUPP still received the money. The act of receiving money from 1MDB not only embarrassed Sarawak but bring shame to Sarawakian.

SUPP always claimed that they will fight for Sarawakian and protect Sarawak autonomous rights, but these are all political show. Over the past 56 years, they never really fight for Sarawak, they even loss our autonomous rights and status. They even betrayed Sarawak over the RM180,000.00. We can no longer trust and support a party like SUPP which is untrustworthy and has no principle.

Prior to the GE-14, GPS and SUPP always said that Najib is the best Prime Minister. After BN lost in the GE-14, PBB, SUPP and, PRS and PDP decided to quit from BN and formed their own coalition, GPS. This has proven GPS and SUPP only care about profit, benefit and cronies. Once you have lost your value, they will abandon you, just like what they did to UMNO and Najib.