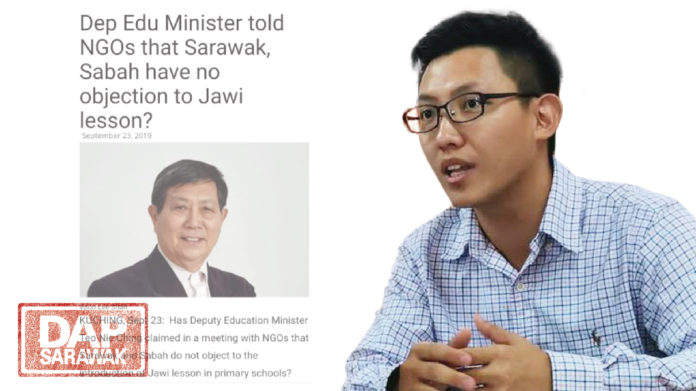 It is sad that a political party’s chief is to rely on untruth as the basis of his statement.

Voon Lee Shan’s claim that “TeoNieChing said in a meeting that Sabah and Sarawak did not object to the teaching of JawiKhat in the education curriculum” is totally untrue.

The KhatJawi issue has caused tremendous objection amongst the Chinese community.

It was a policy set down by the previous BarisanNasional Government in 2015 and such is to be implemented in Primary Four syllabus in 2020.

After much dialogues and engagement, the Cabinet minister came to the decision that:

1.The Jawi writing is only confined to 3 pages only, merely for viewing;

2.There shall be no assessment and no examination on the Jawi writing; and

3.Parents of the students shall have the option to request that the 3-page Jawi writing be not taught in class.

Indeed, it is thus a very racially-charged issue created by the previous BN Government back in 2015. Any prolonged public altercation on the issue will do no good for the country as a whole.

However, the present government was able to calm the situation with the above cabinet decision in mid-August.

It is very puzzling that more than one month after the issue was decided by the Cabinet, the President of Party BumiKenyalang, Voon Lee Shan is now trying to bring back to life the issue again, and what more, based on untrue and hearsay statement.

I, as a young person recently involved in politics, would expect more integrity in a veteran politician.