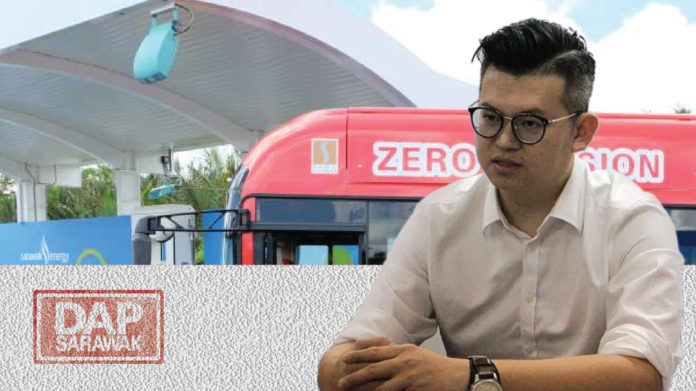 I urge Chief Minister Abang Johari and the State Government to be more accountable in the State’s Hydrogen Bus Project including revealing the cost of the project, contract details with the said company involved and most importantly the economic feasibility study and cost-effectiveness analysis of the usage of these hydrogen buses, in comparison to other renewable energy powered buses including the common electric buses.

This is in response to the troubles faced by the 3 hydrogen buses which underwent trial runs in the city in August and were unable to meet the target date of September 15 for it to be ready for public usage. It is also reported that the government so far had yet to reveal the costs involved in acquiring the buses and building the facility to produce and refuel hydrogen.

This project has already been delayed at least twice as it was supposed to be introduced in July of last year, but somehow it was pushed till August of this year and 15th September as the target date for public usage, but yet such target still could not be met.

While the delay was reportedly due to the temporary halt at the hydrogen production plant and refueling station, but the main question still has to be the feasibility and economic sense of the usage of such buses.

Before this, Abang Johari has mentioned that of such public transportation will be cheap, considering the fact that hydrogen is extracted from water, which is abundant in Sarawak. The reality is that, while water is abundant, and the problem is the amount of energy needed to electrolyse water into Hydrogen, and then convert it back into electricity to charge the batteries in the buses is not cheap.

On top of the production process or ‘electrolysis’ that is not cheap, the cost of building fuelling station itself will also be costly. Are they planning to build multiple hydrogen fueling stations in order to cover a bigger are in Sarawak then? Storing and distributing hydrogen safely requires high speciality and thus will incur high cost.

Thus, I strongly question the direction Abang Jo and the State Government is taking with the introduction of these hydrogen buses, especially when in Sarawak our power is already largely renewable (70%+ Hydro) and an electric bus can easily charge using the grid anywhere anytime, without investing in a non-existent hydrogen infrastructure and distribution network.

That is why the State Government must be transparent with the feasibility study of the whole project and whether it is worth using our precious public funds to undertake such project when there are better options out there. This should not be an “image” project at the expense of “pragmatism”, efficiency and economic reality on the ground.