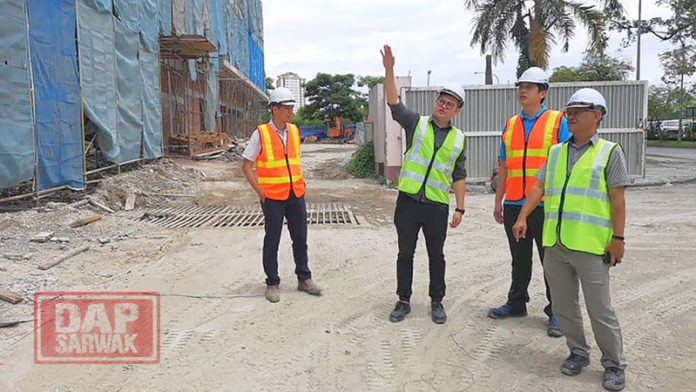 Based on a public tip-off of possible slow progress, I paid an unannounced impromptu check again on the ongoing construction of the Sarawak General Hospital (SGH) multi-level car park and upgrades. There were complaints that the construction workers have stopped work for a period of time which may cause possible delays in the project. This will affect the convenience of not just staff of the hospital, but also the public in general.

I was then briefed on the progress by the Project Developer and Concessionaire, Asaljuru Weida Sdn Bhd (AWSB) on the progress of the construction, and to also follow up and discuss on the issues faced during construction during my previous visits. Previously, I confirmed that a concrete slab in the new hospital was reported to have failed in meeting technical specifications due to the use of substandard concrete. This has since been demolished and rectified accordingly.

Currently, a new contractor with a strong track record of building hospitals has been brought in to help to accelerate the construction, hence leading to the reported temporary stop of work. Due to this transition, works at the site did come to a halt for about a week, but the new contractors have already restarted the construction works. They also have given the assurance that they are doing all they can, and are willing the incur additional costs of acceleration, including cost of additional workers and equipment to be mobilised to the project so as to accelerate their progress.

I have personally been to the site a few times to closely inspect on the progress of the multi-level carpark and hospital upgrades as this is of public interest, not just to the people of my own constituency, but to the people of Sarawak as a whole. Even with any kinds of setback or possible delays in the construction of any of the blocks, the developers AWSB have taken the responsibility and given the assurance that quality and safety of these upgrades are of paramount importance.

I commend AWSB for their action and transparency in ensuring that their contractors perform to the required standard. I will continue to monitor the progress of the much-needed upgrades in SGH that must be completed quickly, of course without jeopardising the safety and quality of construction for the interest and benefit of all the hospital users. I also believe that this is what AWSB desires, as they will have to manage these upgrades upon the completion of these upgrades.