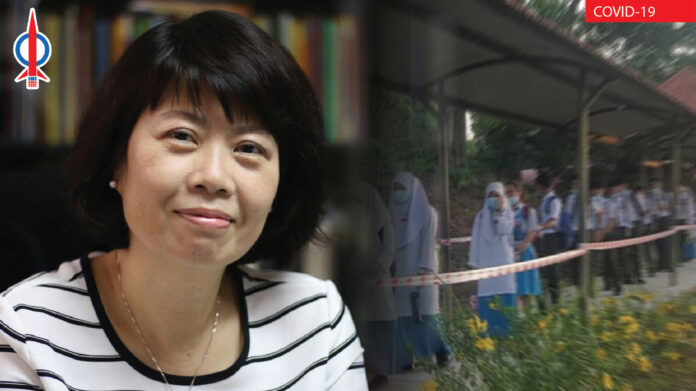 It doesn’t make sense for SDMC to extend the Conditional Movement Control Order (CMCO) in Sarawak from March 16 to 29 and yet doesn’t also extend the reopening of the 220 primary schools which are located in hotspot areas in Sarawak.

Given that the Deputy Chief Minister Datuk Amar Douglas Uggah Embas has said that the CMCO was extended because of the high number of Covid-19 cases in the state currently, SDMC should therefore explain to the parents of school students on why is it safe for schools to reopen on 15th March especially when almost every day for the past few weeks, Sarawak has ranked in the top three of the most numbers of daily new positive cases in the whole of Malaysia.

SDMC is taking a big risk in allowing the schools to reopen now and which might cause all the efforts made in the past few months to go to waste.

In Sibu, the numbers stay relatively high and contributed hugely to the high numbers which had put Sarawak in the top three in Malaysia. Not only parents are worried about sending their children back to schools but the teachers are also worried about returning to schools to teach.

Apart from the worries of a high community transmission rate among the students and teachers during the schools’ long hours, the teachers are also stressed out that this year, they have not received any allocations for them to purchase or stock up on their disinfectant equipment, masks and hand sanitizers for their students and teachers.

Principals and teachers have to source for their own funds to acquire what is required. In fact, the teachers in a school have taken the initiative to collectively raise a fund among themselves to buy a disinfectant spray equipment to prepare to disinfect the classrooms after the school session ends every day. Some have also taken the initiative to have a zoom meet with the parents of the students to seek their cooperation in how to ensure that their children would observe the strict SOP in school for the long hours they have to be there.

While all these are very commendable efforts by the schools, it is perplexing that while SDMC expects the schools to reopen and yet no helping hands have been extended to the schools to properly equip them to open in such a challenging situation.

Although the same sanitation and distancing procedure are expected to be observed, the absence of the helping hand and a national strategy has left schools to craft their own approach.

I also understand that no ground work such as random samplings of the students from different backgrounds and areas to trace their close contacts and movements have been done before they are allowed to return to school. In the absence of such efforts to know the community transmission rates among the students first, every child would pose a risk as well as being a risk to others in school.

In the absence of such background work and against the daily record of high numbers of positive cases, it would be more prudent of the SDMC to not allow the schools to reopen now but to instead postpone it until the situation is improved or at least until the end of the extended CMCO. SDMC should also ensure that the schools have all the necessary assistance, financial and otherwise to be fully equipped to open the schools safely by then and to prevent any outbreak in their school.