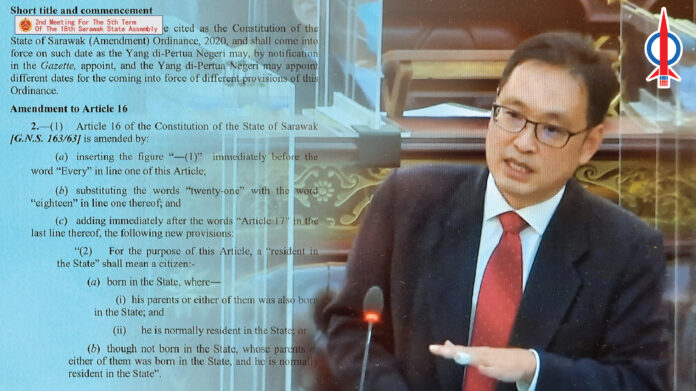 For a complete narration of what transpired in Sarawak DUN over these few days, I will reproduce the 2 versions of the Amendment Bill.

The First Amendment Bill is as follows:

The relevant part of Section 71 of the Immigration Act provides as follows:

“ 71. (1) For purposes of section 66 a citizen shall be treated as belonging to an East Malaysian State if—

The objectionable point of the first version of the amendment bill is that it allows a West Malaysian or Sabahan who is also a permanent resident of Sarawak to be elected as a member of Sarawak DUN which is the last bastion of the rights and privileges of Sarawak and Sarawakians.

Sarawak DUN is the highest legislative body of the State where the State laws and policies are formulated. The State cabinet ministers are also selected and appointed from the members of Sarawak DUN.

Therefore, its membership must be kept exclusively for Sarawakians only. Non-Sarawakians should not be allowed to be elected as a member of Sarawak DUN even if he is a permanent residence of the State.

On this ground, we DAP and also PSB objected strongly to the Bill.

On 10-11-2020, after our strong objection, the Speaker “deferred” the first version of the Amendment Bill. In my 15 years in Sarawak DUN, this has never happened, a Government Bill is deferred in the midst of debate.

The fact that the Government deferred the first version of the Amendment Bill gave credence to our strong objection and verify the strength and correctness of our objection.

The second version of the Amendment Bill is as follows:

In essence, the second version provides that if either or both of a person’s parent is born in Sarawak and he is normally resident in the State, he shall be eligible to be elected to be a member of Sarawak DUN.

Take for example, over the past 57 years, there are hundreds of thousands of West Malaysian government servants (police, army, teachers, doctor, nurses, etc) being transferred and served in Sarawak for a certain period of time during their service, and thereafter, they returned to West Malaysia.

Many of them may have given birth to children while they were in Sarawak. Therefore, their children will satisfy the criteria of “born in Sarawak”. Over 57 years, there must be tens of thousands of such “Sarawak-born” children who are now living all over the country and they are not Sarawakians.

Following the second version of the Amendment Bill, all the children of these Sarawak-born children will satisfy the “Sarawak” connection and if they are normally resident in the State, they will be eligible to be elected as members of Sarawak DUN.

Therefore, the second version of the Amendment Bill, in this manner, is effectively also opening up the membership of Sarawak DUN to non-Sarawakians.

Effectively, this motion to amend the second version of the Amendment Bill will close all doors to non-Sarawakians to be elected to Sarawak DUN.

The motion to amend the second version of the Amendment Bill was tabled by me in Sarawak DUN today (12-11-2020). The Speaker rejected my motion on the most absurd of reasons, ie. failure to give 10-day notice.

Unprecedented Voice-Voting for Amendment of the Constitution

When the debate on the second version of the Amendment Bill ended, the Speaker, instead of having a division to count the vote, resorted to voice voting to get the bill passed.

This is unprecedented and unconstitutional.

For an amendment to the Constitution, there must be at least 2/3 rd of the members supporting such Bill and every vote must be counted and recorded. By doing so, everyone who voted will be recorded in the Hansard their votes and it will go down the history how they voted.

By resorting to voice voting, there is no way that the Speaker and the House can be certain that the Bill got the 2/3 rd majority votes that it requires for it to be passed.

With the passing of the second version of the Amendment Bill by Sarawak DUN today, any Malaysian, so long as one of his parent or both was born in Sarawak, regardless whether he is a Sarawakian, if he normally resides in Sarawak, he is eligible to be elected as a member of Sarawak DUN.

This is the latest incident of the erosion of Sarawakians’ rights and the culprit is none other than the GPS government.

Setting Up A Telecommunication Company Will Be Another Wasteful Project

Due to the Constitution Flaws, Sarawakians Might Lose Their Rights To Participate In Politics—Chong

Government Must Spend More When The Economy Is Bad

SUPP Claims That With The New Amendment, Only “Sarawakians” Can Be Elected As Sarawak ADUN Is A Lie

Chong submitted the appeal letter of BSH on behalf of taxi drivers to the...

Setting Up A Telecommunication Company Will Be Another Wasteful Project

Development Allocation for Sabah & Sarawak Should Increase When The Total Development Expenditure Allocation...

Reveal The Final Report Of Special Committee For MA63

Kelvin Yii Lee Wuen DAP Sarawak - 23/11/2020
Press Statement by YB Kelvin Yii: Today in Parliament i stood up in Parliament when the Minister of Sabah...

GPS Urged To Explain For The Shortfall Of The Special Grant

Queries Are Important To Prevent Wastage And Unfair Enrichment

Development Allocation for Sabah & Sarawak Should Increase When The Total...

GPS Urged To Explain For The Shortfall Of The Special Grant