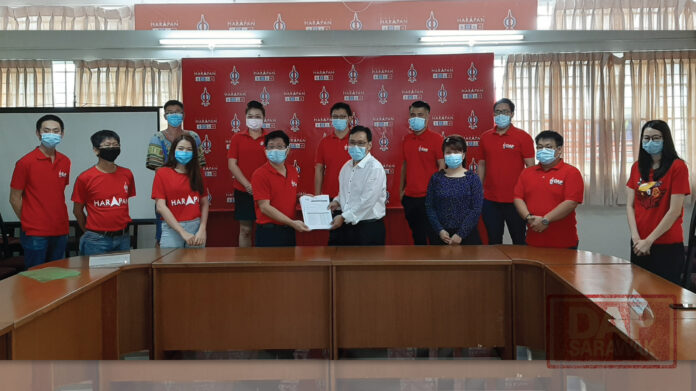 Today, we witness the submission of nearly 100 new membership applications to form the DAP Green Road Branch located within the Batu Lintang state constituency. As chairman pro tem, together with my dedicated team, we are committed to continuing our party struggle with integrity and discipline. It is our duty, therefore, to represent the people, to understand their plight, and strive to deliver better services, fight for better policies, and better benefits to the people.

On 9th May 2018, majority of Malaysians voted us into government after tired of living in decades of corruption and unnecessary racial and religious tension under the previous BN regimen. Our mandate is to deliver a transparent, accountable, and clean government.

Unfortunately, the PH government’s reform agenda has been hijacked by selfish politicians undermining our fight on corruption and for competent economic management for the wellbeing of the Rakyat. Under the new PN government, with the help of GPS , instilling religious bigots of PAS and UMNO back in power, which has failed to demonstrate even the slightest remorse for their long years of misrule, for the billions that were lost to corruption, for clamping down on civil liberties and for undermining our national institutions.

Instead, we now see individuals with corruption trials had been acquitted and discharged of their charges linked to corruption. We will see more of such incidents unfolding themselves in the near future, an indication of the return of the kleptocratic regime.

More often than not, they made DAP the bogeyman to justify their traitorous act of betraying the mandate of the people, stirring up racial and religious tension by labelled DAP as anti-Malay. At the same time, GPS would instead work with PAS than with DAP.

Despite all these, within the short span of one week, we have seen a flood of people joining DAP hence with the establishment of 3 new branches in Kuching and another one in Tasik Biru. This goes on to show that the ordinary folks on the street still regards the DAP as the party of integrity and principles. This strengthened by the fact that all our MPs stood their ground and true to their promises to their voters by not ‘abandoning ship’ for ‘wealth and power’.

Sarawakian had been short-changed long enough, hence billions down the drain due to scandalous corrupt practices that would otherwise benefit Sarawakian in developments and the basic welfare of Sarawakian. The zealousness of the GPS state government in building castles in the air only adds salt to the wound, taking normal Sarawakian for a ride into the oblivion.

Take some, for example, the 7G networks. While 1st world countries are still putting up 5G, ironically, we can’t even live broadcast during DUN seating to Sarawakian, what is there to hide? If the state government, which talks about 7G can’t also broadcast live when on the session and be transparent with Sarawakian, what more talking about protecting Sarawakian rights?

What would be the justification of using Hydrogen buses and the apparent least effectiveness of producing the hydrogen via electrolysis? A typical comparison of a sedan Electric Vehicle (EV) versus hydrogen Fuel Cell Vehicles (FCV) shows that in the worst-case scenario, the cost running an FCV can be 3.5 times to 8 times the cost of running an EV after considering other factors in terms of efficiencies such as charger, electrolysis, compression, fuel cell, inverter, motor, etc. Having said that the last we check the hydrogen bus have not resumed operations despite the government easing travel restrictions which were launched early this year. According to the latest press release by SEDC Sarawak dated 29th June, the bus service only to resume later after scheduled maintenance works fulfilled.

The GPS government is ought to come clean and transparent with Sarawakian on how the money in the state coffer is spent. They should be held accountable as these are taxpayer money and should be spent in the most effective and optimal manner for the battlement of Sarawakian and not to other white elephant projects or build castles in the air.