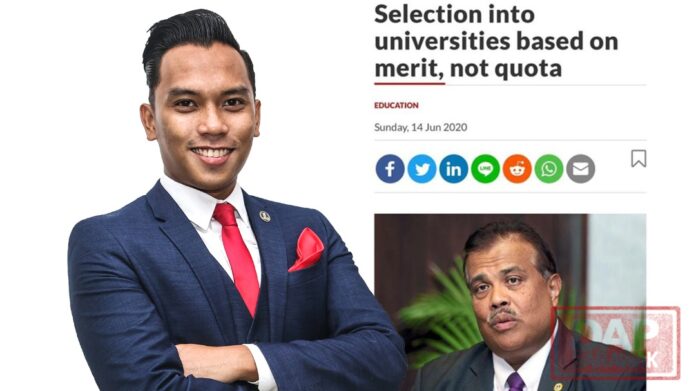 I am writing this rebuttal statement regarding the latest press statement issued by the Higher Education Director-General Prof. Datuk Seri Dr Mohamed Mustafa Ishak which was published in the StarEdu
https://www.thestar.com.my/news/education/2020/06/14/selection-into-universities-based-on-merit-not-quota

Mustafa was quoted saying that “the student recruitment process for public higher learning institutions (IPTAs) is based on meritocracy… no quota system was practiced’. I beg to differ most of his points and I believe that many will share the same view as mine. The quota system has long existed in our education system for nearly half of century. Worse, it has become a race-based approach rather than rights-based approached.

The matriculation programme, for an example, is seen as a fast-track option to enter public universities, was originally fully reserved for bumiputras. Since 2002, a 10 per cent non-bumiputra quota has been put in place. While some defend the matriculation policy, others decry it on grounds that it is unfair to continue depriving non-bumiputras of one of the channels to tertiary education. No one is denying the need for affirmative action in Malaysia, especially in education. The pressing question, however, is whether the policies should be fine-tuned in keeping with the current political and social context.

The dissatisfaction is compounded by the fact that the alternative to this pre-university path such as the Malaysian Higher School Certificate (STPM), takes longer time to complete and is perceived to be more difficult. The broader issue here should be promoting and protecting access to higher education to all. This is because the quota system that exists in Malaysia has a discriminative effect on minorities and underprivileged especially the Chinese, Indians, Eurasians, Aboriginals (Orang Asli), Dayaks and KadazanDusunMuruts (KDMs).

Firstly, it has a discriminative effect on the minorities. Many minorities among the non-bumiputeras such as the Chinese, Indians and Eurasians who had excelled in their STPM are not eligible to enrol themselves in the IPTAs. Even though they have met the entry requirements but often time, their applications are rejected. No reason has been expressly given by the IPTAs to explain on why their applications got rejected but from the action itself, it speaks loud enough on the race-based quota system itself. Logically, any reasonable man would have to believe that if the application system is selected based on meritocracy; these non-bumiputeras who had excelled in their STPM will definitely get their chances to get their enrolments in the IPTAs.

Secondly, it has a discriminative effect on the indigenous people in Peninsular, Sabah and Sarawak. Indigenous people, especially the Orang Asli, KDMs and Dayaks, often remain marginalized from university access despite having bumiputra status. It is a well-known fact in the eyes of the laymen that the federal government is just using the terms of the so-called “bumiputera” to justify their intention. If it is true that the race-based quota system will give benefit to the so-called “bumiputera”, then why are some of the indigenous people in Peninsular, Sabah and Sarawak especially the Orang Asli, KDMs and Dayaks left out and do not get fair access to IPTAs? Why do most of them end up studying in the private higher learning institutions (IPTSs) instead? Again, logically, any reasonable man would have to believe that if the application system is selected based on race-based quota system, the indigenous students who had excelled in their STPM will definitely make the most enrolment in the IPTAs that exists in both Sabah and Sarawak.

From the three points given abovementioned, it can be concluded that the race-based quota system does not gives benefits not only to the non-bumiputera such as the Chinese, Indians and Eurasians but also the marginalized indigenous people from Peninsular, Sabah and Sarawak such as the Orang Asli, KDMs and Dayaks as well as the underprivileged from both bumiputeras and non-bumiputeras. In this era of globalization and international competitiveness, education should be a universal right and it is high time to prioritise equitable access to higher education for all Malaysians.

Thus, I urge the Higher Education Ministry to change the race-based quota system to a rights-based approach that emphasises equity in opportunities that is much needed in order to create an environment that discourages discrimination and promotes equality and inclusivity without affecting the quality of education.