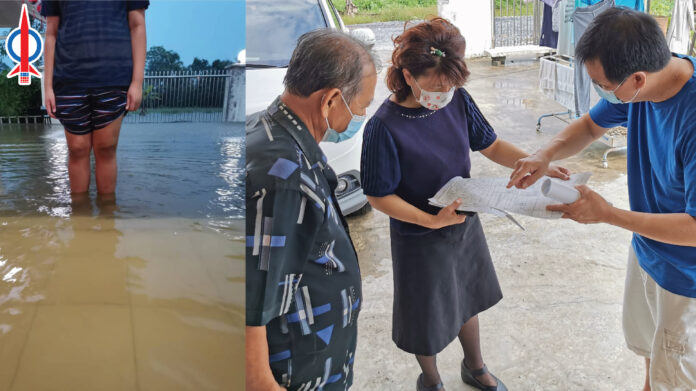 Despite the fact that a vast number of housing development projects are mushrooming at Jalan Field Force, Off Jalan Batu Kawa area over the last two decades, flash flood problem has worsen due to poor drainage outlet.

The affected residents are very disappointed with the lackadaisical attitude of the authorities for failing to address the issue effectively and promptly. The authorities concerned including the Ministry of Local Government, the Department of Drainage and Irrigation Sarawak, Public Works Department Sarawak and the Padawan Municipal Council are fully aware of the root cause and severity of the problem. Yet, there is no concerted effort from them to ensure that a proper and effective drainage system is built to cater the water discharge till now.

As told by the affected residents, over the years, whenever the flash flood issue is brought up to the attention of the relevant authorities, it will be kicked like a football between the Department of Irrigation and Drainage Sarawak, Public Works Department, Sarawak, Padawan Municipal Council and their appointed contractor. The residents are feeling helpless as their calls for help have been fallen on deaf ears.

I urge Dr Sim Kui Hian as the Minister of Local Government to be more proactive in his role to ensure that Department of Drainage and Irrigation Sarawak, Padawan Municipal Council as well as relevant parties involved under his ministry to take immediate action in implementing a proper drainage system at Jalan Field Force, Batu Kawa which is long overdue to resolve the flash flood issue.

“As a Minister responsible for the portfolio, he should be more attentive to people’s woes rather than letting the aggravated flash flood problem remain unsolved years after years.”

As a short term measure, the Padawan Municipal Council is required to carry out clearing works at the existing stream crossing the private lands nearby Lorong Field Force No. 4 which is one of the responsibilities prescribed under the Local Authorities Ordinance, 1994 in order to increase the rate of the water outflow.