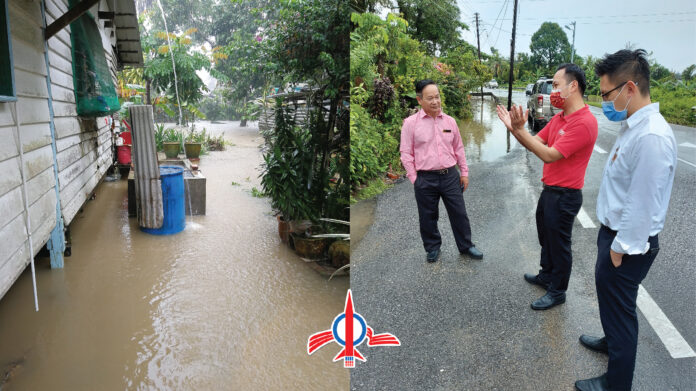 Just when I thought that I have heard all types of excuses one can possibly hear, this morning’s incident left me gobsmacked and speechless.

I went around Kota Sentosa and witnessed many residents frantically moving their belongings to higher grounds due to flash floods. While walking along Jalan Stakan, I bumped into the Kapitan who was there to take pictures of the flash flood. Naturally, I saw it as an opportunity to engage in a proper discussion with a local representative to see what steps may be taken to avoid such disastrous incidents in the future.

Instead of trying to explore ideas together, the Kapitan tried to wash the hands of the local government and said that there was nothing that they could do to resolve such issues. Thereafter the Kapitan said that only God is to be blamed for the incident because of the persistent rain. The said Kapitan even told the local residents to ask representatives of DAP to ‘suck the water out.’

This is a new low for a representative appointed by GPS under the SUPP ticket. Such problems continue to haunt the people of Sarawak particularly in Kota Sentosa because of the sustained dereliction of duty by the current GPS leadership. Bear in mind that GPS is currently helming the local council (MPP), State government and also a part of the Federal government. If GPS cannot help the people despite having all the position of power that it currently enjoys, then it simply means that GPS is useless and cannot be depended upon.

When issues respecting poor basic infrastructures are raised, the standard reply by the local government is that there is no funding. However when it comes to extravagant spending like an RM60million complex for the local council, somehow the government has funds to undertake such construction.

The people have been taken for a ride for over 57 years. To this we say ‘enough is enough’. GPS should roll up their socks, buck up and get to work!