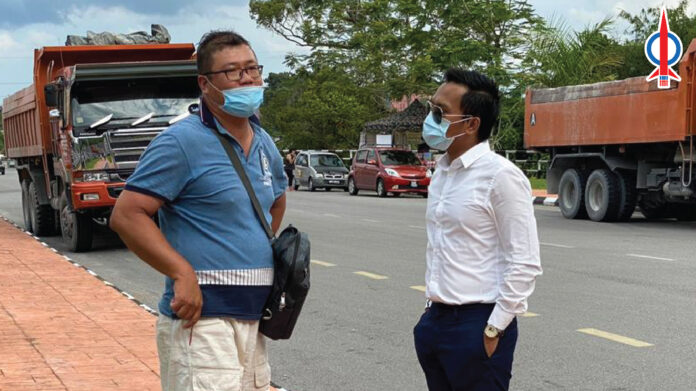 I received a complaint regarding the problems of heavy vehicles frequently using the two roads namely Laluan Sentosa Parade and Jalan Greenville Park which connecting to Greenville Park.

The problem was brought to my attention by Mr Anthony Lau Ung Ping (“the complainant”) who was one of the residents staying at Greenville Park. According to the complainant, the heavy vehicles drives beyond the reasonable speed limits despite carrying tones of sands, cements, stones and logs. This problem has been going on for more than five years and the number of heavy vehicles using the two said roads has been increasing. As such, it poses serious danger to the residents as well as the road users.

Since these two said roads fall under the jurisdiction of Padawan Municipal Council (“the Council”), it is the duty of their local councilors, which were politically appointed by the state government, to go down and take necessary action to solve this issue under their wards. The local councilors should not come up, if any, with any excuses for not
being able to perform their duty because under the Local Authorities Ordinance 1996 (LAO) they are being paid with ‘other allowances’ as stipulated s.131(u) and ‘every councilor and every person appointed to any committee constituted by a local authority may be paid such salaries, allowances or other expenses’ as mentioned in s.15. Thus,
the local councilor should perform their duty and allocate more time to attend public complaints under their own wards. The question is, where is the local councilor in-charge of this area?

The complainant informed me that the residents here had never seen their local councilor and they have no idea who the local councilor in-charge of their area is. Since they have no access to this information, the residents decided to lodge an official complaint to the Council by themselves. The lodge of the complaints was to request the Council to build speed bumps to slow down the motor-vehicle traffic in order to improve safety conditions. This is because the speed bumps will encourage safer, more responsible driving and potentially reduce traffic flows. As such, the request for speed bumps has become a matter of urgency which requires immediate action expected from the Council.

Unfortunately, the feedback received from the Council seems to be very frustrating. The Council told the residents to collect signatures of at least 70 per cent of the residents of Greenville Park, only then will the Council may be able to take necessary action. Is the Council aware that it is their duty in LAO 1996 to build the speed bump as stipulated in:

As such, based on the following propositions, in which part of the sections that:

Throughout my experience in politics, I have never heard such requirements exist when it involves the safety and lives of the people. If such requirements do exist, then it is deemed ridiculous and an absurdity. It only goes to show that even a small request to build speed bumps required by the people to go through such a red-tape bureaucracy.

The Council should reduce such red-tape bureaucracy and instead, increase their service efficiency and effectiveness.

As such, I urge the Council office to take the residents’ complaints seriously and expedite their request to build speed bumps without further delay.

Since this issue involves heavy vehicles, it is necessary for the Council to install restriction barriers at each entrance to avoid heavy vehicles using the said roads.