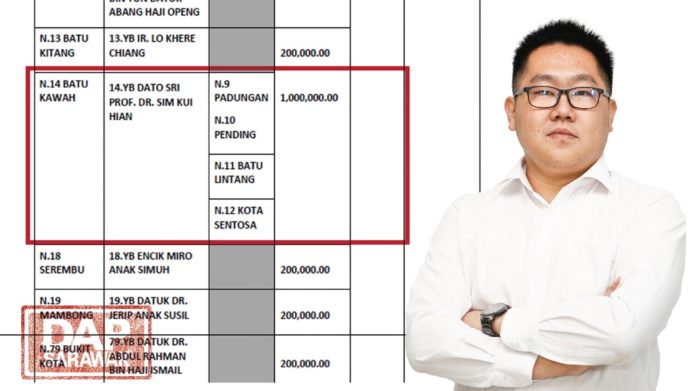 Deputy Chief of DAP Sarawak Youth Peter Hee reminded GPS to be fair to all constituencies across Sarawak during the Covid-19 outbreak.

Peter Hee said in a statement today that GPS has politicised the special allocations of RM200,000 for each constituency when opposition state assemblymen are prevented from accessing these allocations. This is in contrary to the “Sarawak for Sarawakians” slogan that was propagated by GPS as only GPS-held constituencies are given access to these special allocations.

He believes that it is necessary for Sebastian to provide a list of food aids, including how many food aids will be sent to residents in Pujut and to explain the procedures for residents to submit applications to him.

Peter also urged Sebastian to deal with the special allocation transparently. After all, these are taxpayers’ money and the funds ought to help people who are most in need in Pujut.

In addition, Peter hopes that the RM 400,000 special allocation managed by Sebastian will be handled solely by his Piasau branch, instead of appointing another agent to purchase and package, so as not to give rise to profiteering opportunity.

Peter said that according to the “Sarawak Report”, the Sarawak government decided on March 31 to allocate RM200,000 special allocations to all state assemblymen , but withdrew the decision on April 2 and prevented the opposition to access the fund. Instead, the allocations for opposition constituencies are allocated to adjacent constituencies held by GPS.

He noted that the State Housing and Local Government Minister Dr Sim Kui Hian and the Assistant Minister of the Ministry of Housing (Housing and Public Health) YB DR Annuar Rapaee may receive a maximum of RM1 million each. In addition to the funding for the Batu Kawah constituency, Dr Sim also has access to funds included under opposition constituencies namely Padungan, Pending, Kota Sentosa and Batu Lintang.

He said that for Sibu’s four opposition constituencies, Annuar rapaee, who is also a state assemblyman of the Nangka, served as the general coordinator of the food aid distribution plan. In any case, he hopes that all needy households in the constituencies can receive relief food aid to ensure that people do not endure starvation during the Covid-19 outbreak.

SUPP Should Question Their Decisions Made, Not Throw Hypothetical Questions At DAP

Huge Backlog in Approval of Employment Pass for Foreigners A Sign of Losing Immigration Autonomy?

Government Should Explain The National Testing Strategy For Malaysian To Transit Safely Into Endemic...

Common Prosperity For East & West & Respect For Religious Freedom Of All

Julian Tan Kok Ping DAP Sarawak - 24/09/2021
Press Statement By Julian Tan: I would like to urge the Welfare Department to develop a proper mechanism or...

Government Should Explain The National Testing Strategy For Malaysian To Transit...