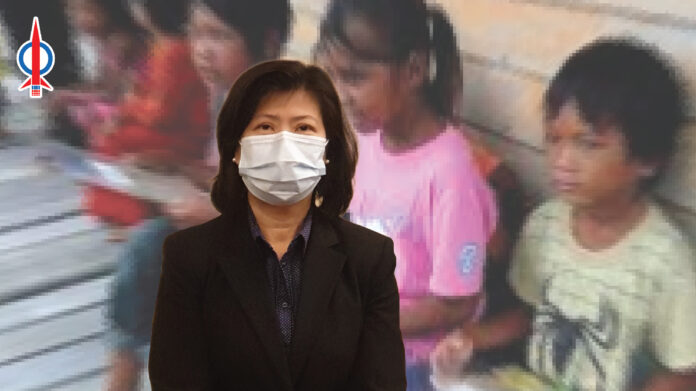 The Minister of Welfare, Community Wellbeing, Women, Family and Childhood Development should officially write to the Ministry of Education to appeal against the latest policy on stateless children which requires them to produce a passport to be enrolled in government schools. It is no use to appeal through the media as the Education Ministry does not have to officially take note of it. Instead, the State Government Ministry should officially communicate with the Federal Ministry and expound to them on the “Zero rejection policy” which was implemented under the Pakatan Harapan Government.

The “Zero rejection policy” was a policy which aimed to ensure that all children in the country, including undocumented children and those with special needs would have access to education. Under the policy, the applicants of the undocumented child concerned only had to produce any one of the following documents to be accepted into the government schools:

1) a birth certificate
2) a guardianship order
3) an Adoption Certificate. They also had to show a connection with a Malaysian and that efforts have been made to apply for citizenship under Article 15A of the Federal Constitution.

In 2019, it was reported that this policy under the Pakatan Harapan government had enabled at least 2,635 undocumented children in Malaysia to enroll in public schools in that year.

The requirement for a passport is therefore a regressive step by the current government and which shall lead to many undocumented children in the country to be again deprived of education as in the previous BN days. In fact, I have already received a few calls from concerned guardians and adoptive parents in Sarawak concerning the latest policy. A few who thought that their children had already been “successfully enrolled” and who have been participating in “online studies” in government schools since the reopening of the school year have now been informed by the schools that their “enrolment” could not be approved after all. This would definitely have a detrimental effect, both physically and psychologically on the children concerned.

I therefore urge Dato Seri Fatimah and Sarawak State Government to officially communicate with the Ministry of Education and the Federal Government to speak up on behalf of the stateless children in the state. They should put aside politics and strongly advocate on the continuation of good policies even if they were the products of the previous Pakatan Harapan government. They can even make suggestions of improvements on the “zero rejection policy” to enable even more undocumented children to receive education. Education is the very foundation for our people to achieve success in life. There is therefore, no point for the GPS government to constantly showcase their tangible political achievements if they have no influence on the Federal Government on the continuation of policies which, if stopped, would adversely affect the physical, emotional, mental and psychological wellbeing of a sizeable
portion of our future generations.

This would therefore be one of the defining moments which can prove if the GPS government indeed has the political clout to positively influence decisions for the benefit of both of our documented and undocumented people.