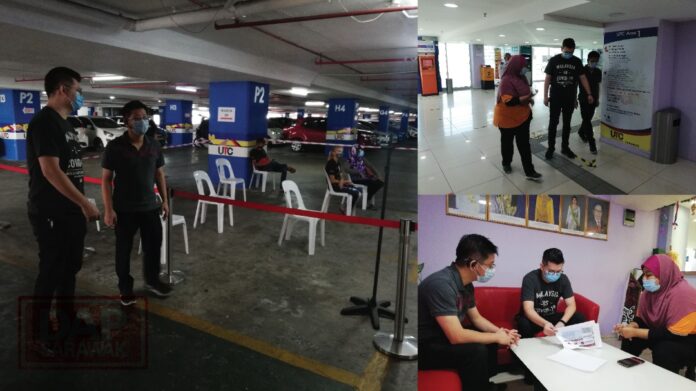 Together with Sdr Julian Tan, we paid a visit to the UTC Branch in Kuching to better understand the reason why certain essential Government agencies such as Jabatan Pengangkutan Jalan(JPJ), Jabatan Pendaftaran Negara(JPN) and others is not open at UTC to offer the required services to the general public.

Since the implementation of MCO, the UTC has not been operational due to the directive from the government.

We have received countless of complaints from the public due to slow service and long ques in JPJ, JPN or other government agencies counters at their HQ since they are unable to utilise the fascilities in UTC.

For many, they need to travel all the way to JPJ HQ at 12th and que up to 3 hours just to renew their road tax, renew licenses or other matters as well. Some also have to que for many hours under hot sun at the post office to do so, and in many instances, they experience “system down” and forced the customers to travel up to the HQ again.

All this long queues and wait can be reduced if the government departments in UTC are fully functional given the public more options and counters to settle their business.

We had a short meeting with the officers from UTC and they have informed us that the latest government directive is that those government agencies will start operation only on Monday (15th June 2020) from 8am till 5pm everyday including weekends.

We also give them feedback and suggestions on ways to improve the operations and also will write to the Ministry to follow up on those issues, on top of raising it in Parliament if needed.

While i welcome the the announcement of the opening of those services for the convenience of the public, but i do question why did it take so long for it to be opened, and do not see a reason such such a delay even if certain SOPs and precautions needs to be implemented.

Actually, the Sarawak Sevice Counters at UTC has been opened since the 15th May 2020. The SOPs and precautions for those operations is similar and should be able to be adapted for the opening of the other government agencies including JPJ and JPN.

That is why i do not see any reasonable excuse that it cannot to be opened earlier especially since it is providing essential services for the public. If those services were opened earlier, the public will not have to crowd and queue for so long in the post office or even travel up to the current JPJ HQ just to settle their issues.

On top of that i urge the government to extend the operation hours for those Government agencies in UTC beyond the current 5pm so that those that are working can come after working hours to settle their business.

They should be prepared for any eventuality including for a larger crowd. The longer hours is needed to service the expected crowd that will come the moment it opens and to also clear the backlog caused by the implementation of the MCO.

They will also need to mobilise some of their staff to monitor the compliance of the public towards the required SOP and precautions. We do not want any spread of any infection during the operations of such services.