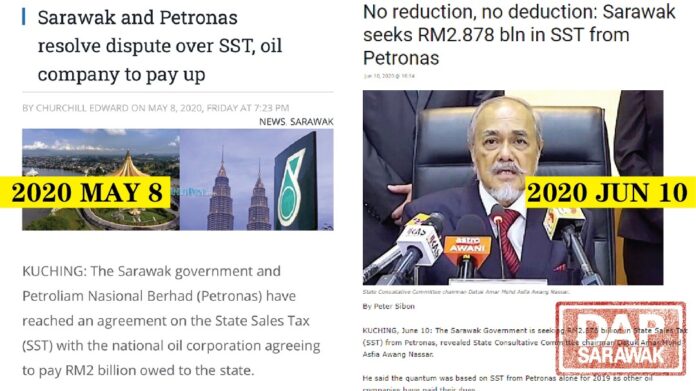 DAP Sarawak welcomes the position taken by the Sarawak Consultative Committee on Malaysia Agreement 1963 as announced yesterday after the committee sat.

In actual fact, the Sarawak Consultative Committee on Malaysia Agreement 1963’s announcement yesterday contradicts the position of Sarawak Government who has made a joint press statement with Petronas on 8-5-2020 which categorically and unequivocally stated as follows:

1.That Sarawak shall accept RM2 billion as full settlement of the outstanding SST amount;

2.That Sarawak shall gradually reduce the 5% rate of SST to be imposed on petroleum product in future; and

3.Sarawak recognises the rights and ownership of Petronas under Petroleum Development Act, 1974 over the oil and gas found in Sarawak.

The question now is, who has the final say on the matter for Sarawak, the State cabinet or the Consultative?

In terms of Sarawak Constitution, the State cabinet has the final say on all matters governing the decision of the State Government.

We call on the State Government to immediately communicate the decision of the Consultative Committee to Petronas and to issue a press statement denouncing and retracting the joint press statement made on 8-5-2020. This is to protect the legal rights of the State in our future’s claims on our oil and gas rights.