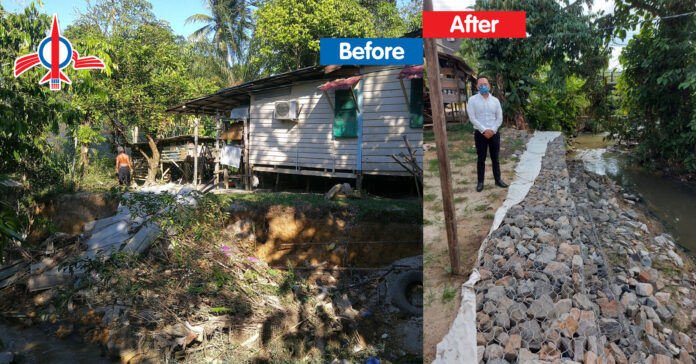 Since December 2020, I have been writing to the local authorities namely Padawan Municipal Council (MPP) and the Drainage & Irrigation Department (DID) to raise an issue revolving around soil erosion along a riverbank within the Kota Sentosa constituency.

Lot 168E of Jalan Stakan sits along the main road of Jalan Stakan, just right next to a river. The main issue for Lot 168E stems from the non-existence of any retaining wall and/or concrete wall along this riverbank. This has caused the land on which Lot 168E sits to slowly erode.

On 19.02.2021, there was heavy rain which caused the river along Lot 168E to overflow its banks. This resulted in a massive flash flood which caused much inconvenience to many homes within Kota Sentosa. As a result of this incident, the fence of Lot 168E which was along the riverbank fell and a significant portion of the riverbank eroded away. The soil erosion since the matter was first highlighted to the authorities, which the riverbank was approximately three (3) meters from the house, had caused the boundary to be only three (3) feet by February 2021.

The frequent heavy rain in Kuching especially during monsoon season raises a major concern because the river which runs along Lot 168E will most likely overflow its banks. If this is to continue, we may see the land eroding further until the foundation and/or structure of the house will be affected.

Perseverance and hard work will eventually pay off. I am pleased to note that the riverbank erosion protection works at the said riverbank has been completed. Now the occupants need not have to worry that one day, their home will collapse while they are sleeping.