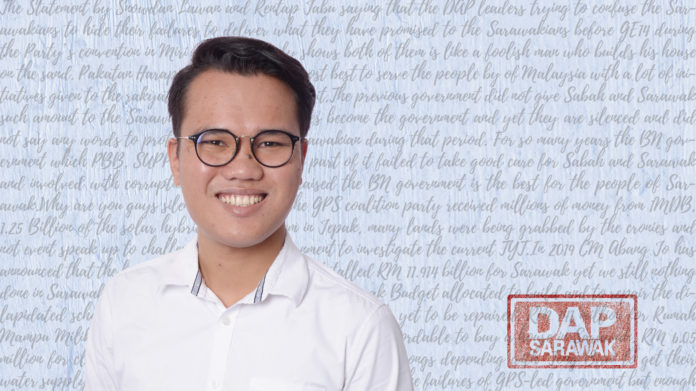 The Statement by Snowdan Lawan and Rentap Jabu saying that the DAP leaders trying to confuse the Sarawakians to hide their failures to deliver what they have promised to the Sarawakians before GE14 during the Party’s convention in Miri recently clearly shows both of them is like a foolish man who builds his house on the sand. Pakatan Harapan is trying their utmost best to serve the people by of Malaysia with a lot of initiatives given to the rakyat, yet they are silent to it.

Why are you guys silent when some of the GPS coalition party received millions of money from 1MDB, 1.25 Billion of the solar hybrid power system in Jepak, many lands were being grabbed by the cronies and not event speak up to challenge the state government to investigate the current TYT.

In 2019 CM Abang Jo has announced that the biggest budget in the Sarawak totalled RM 11.914 billion for Sarawak yet we still nothing done in Sarawak. RM 81.7 million announced in 2019 Sarawak Budget allocated to build and to repair the dilapidated schools in Sarawak yet we still see many schools yet to be repaired, RM 141 million for Rumah Mampu Milik yet we still see many Sarawakians are not affordable to buy a house in Sarawak. RM 6.05 million for clean water in rural areas, still we see many kampongs depending with “Tong Biru” to get their water supply.

I can continue with many other things to address the failures of GPS-led government but enough those mentioned issues for now. Don’t only look at the speck sawdust in other’s eye and pay no attention to the plank in your eye.