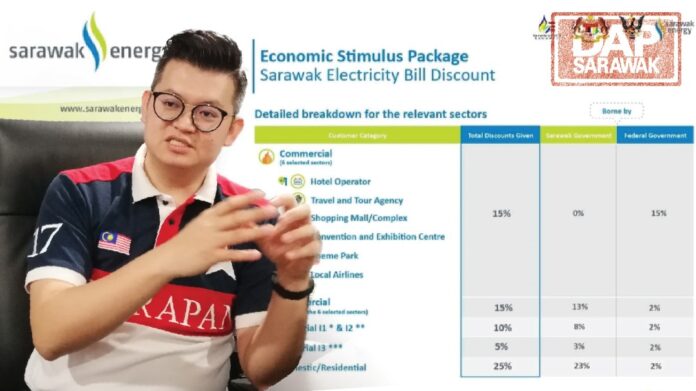 On this basis, it is only fair if the Federal Government engages with the local State-owned Utility Companies such as Sarawak Energy Berhad (SEB) to also extend such financial aid to Sarawak as well, so Sarawakians can enjoy the additional discounts and rebates for domestic user’s electricity bills provided and not limit it to those in West Malaysia.

Currently in Sarawak, the SEB under the State Government provides 23% discount and this is on top of the 2 % the federal government announced before under the economic stimulus package.
From the recent announcement by the Energy and Natural Resources Minister Shamsul Anuar Nasarah, the Federal Government gave an additional RM 942 million in discounts and rebates for domestic user’s which includes free electricity for months of April until June if their consumption for those months were under 300kWh or RM 77

So, this means that the initial 2% have been pushed up to about 10% by the federal government but is only limited to those in West Malaysia. So technically to be fair, in Sarawak, we should also enjoy the additional rebates 10% from federal government on top of the 23% from the State Government on the electric bill which is also high during this MCO period.

Before the change of Government. KWIE was estimated to reach an excess of RM 1.5 billion for June 2020, RM 200 million from their own reserves and an additional RM 1.368 billion from an Imbalance-Cost-Past-Through (ICPT) mechanism and Incentive-Based-Regulation (IBR) that was set by the Pakatan Harapan Government for the period of January to June 2020.

So, since the additional funds that which was obtained through good governance measure done under the PH federal government, is used to fund such initiative, it should be shared among all Malaysians and not just limited to those in West Malaysia as we all are also affected by high electric bills.

That is why I urge both the Federal and State Governments to extend such incentives and rebates to both Sabah and Sarawak so that all Malaysians regardless of demography will not be left out from such benefit.