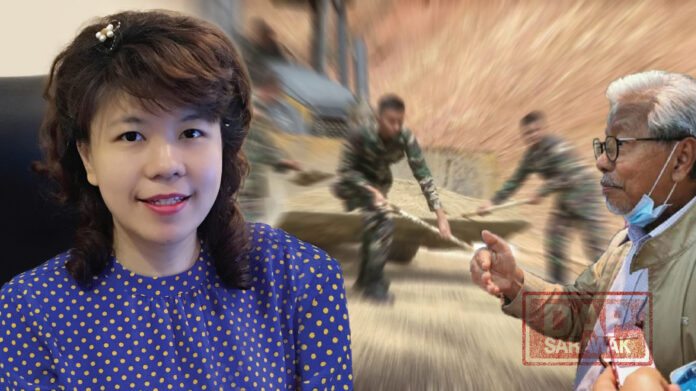 It is the responsibility of the government at both Federal and State level to ensure that our people staying in the interior of Sarawak do not get sidelined but enjoy all the basic infrastructures including proper access roads.

It is so unbecoming for James Masing as the Minister of Infrastructure and Port Development to quickly distance himself and claim that the Jiwa Murni Rural Road project has nothing to do with Sarawak Government after two local companies directors were nabbed and charged in court by Malaysian Anti-Corruption Commission for allegedly submitting false claims for the project.

Perhaps aged is catching up for him and couldn’t remember what he had said before but let me remind him that on the 5th July, 2017 he said this to the Borneo Post:-

“It is the responsibility of the government to provide connectivity for the people. That has been why for some rural areas that need connectivity urgently, we build the Jiwa Murni road first – it requires less funds and can be built in a much shorter time, so connectivity can be provided.”

If indeed the Jiwa Murni Rural Road project under the Ministry of Defence has nothing to do with the Sarawak State Government, why did James Masing talk so much about it as if he is the Minister in charge during then?

How could it be possible that the Jiwa Murni Rural Road project is not connected to the State Government when it is one which concerned very much on land usage for construction of roads? If what James Masing’s claimed is true whereby the state government has nothing to do with the Jiwa Murni Road project, does it mean all these Jiwa Murni rural roads were illegally constructed because the Sarawak Government did not know about it and thus no prior state’s approval was given for it? For a senior minister like him, it is unlikely for him not to know the state functions and duties when it comes to implement any infrastructure development projects including those of federal funded.

Instead of giving various excuses to wash off the state’s responsibilities, I urge James Masing to make a frank disclosure as to why all these years the state government keeps silent about this shortchanged Jiwa Murni Road project by some irresponsible parties and let our people living in the interior parts of Sarawak to suffer and not providing them with proper road access.

If Sarawak Government cannot even provide the very basic amenities to benefit our rural people after staying in power for 57 long years, it clearly shows that this government has failed to be one of people’s centric and thus is not fit to continue govern Sarawak and must be replaced in the coming state election.