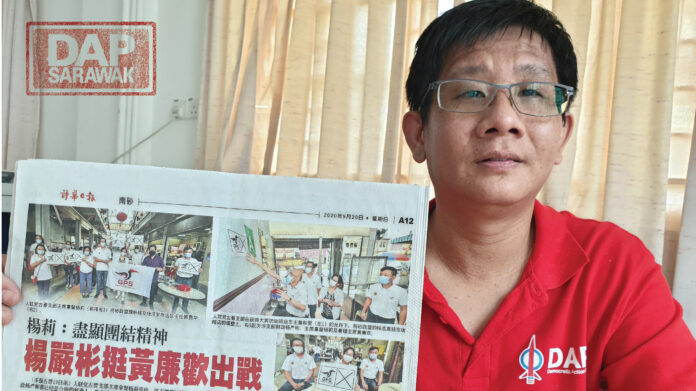 Is Lily Yong denied having shown what resembling ballot papers with a marking ‘X’ next to it during one of their event, which was also attended and witnessed by many reporters where many photos were also taken? SUPP also introduced two of their proposed candidates for Padungan seat for the coming state election.

On the very next day, the 20th of September, it is published in few local newspapers with the SUPP team showing clearly, besides the GPS flag, displaying on what looked like ballot papers with a ‘X’ marking next to it. Besides, the published photos also clearly indicate that the SUPP team also sticking up posters resembling ballot papers on a wall of an eatery outlet.

I am amazed at how the actual event can be told the other way around which, as far as what had been published on the 20th of September in most of the local newspaper here, only what looked like ballots papers with a ‘X’ marking was shown and not ‘heart shape’. How can it be outright ignored?

Regardless, it is clearly stated in Article 3 (1) of the Election Offences Act 1954, “…any advertisement, handbill, placard or poster which refers to an election and contains a reproduction of a ballot paper, or of what purports to be a ballot paper, to be used or likely to be used at such election…”

I will leave the investigation to the police and Election commission (EC) and hope that the EC will carry out their duty without fear and favour.