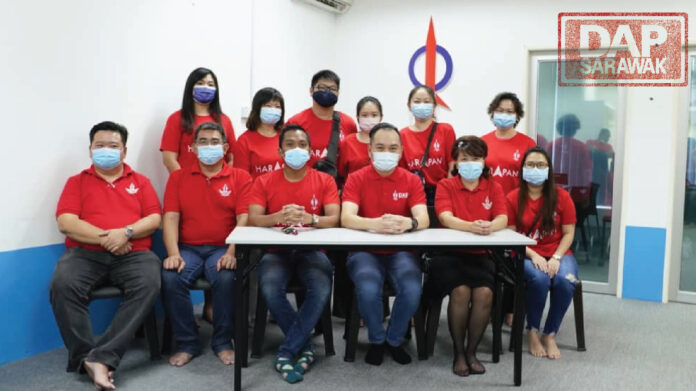 Quoting from YB Chong Chieng Jen’s insightful speech, although the results from Sabah’s general election was unexpected and disappointing, however, despite the darkness, we see that in Sabah, DAP still get majority of votes in the seats that our candidates are contesting for. And it is because our party has strong discipline and principle that gives confidence to the people. Although our enemies might seems strong and united, but there are fractions inside that are fighting against each other. Which acts as a reminder to fellow DAP members to stay strong and united in the midst of ‘war’. Although we have our differences, and may have conflicts at times, but we stay united and strong because we hold strongly to our discipline and believes.

And in less than one year, Sarawak will be having our general election. There is hope as long as we stay committed to our cause, we can achieve our goal. For DAP leaders, when we dictate terms, the terms is based on how the policies should be carried out. If we want to be an influential party, we need to win the areas at Stapok and Pasar Maong, although this is a strong responsibility, this is what’s worth to fight for.

Additionally, quoting from YB Violet Yong’s motivational speech. In DAP, we fight for the rights, interest for the people, state and country. This is the paramount important point of our party. To build a nation which is multiracial and multicultural, we should embrace and take in our differences. This is the party that fight for all races, we will not tolerate discriminations. Al though the battle involves sacrifices of our time and effort, but I believe through DAP, we can build a better nation. We will fight until we win the battle.

I would like to thank the members of DAP Pasar Maong Branch for electing me as the chairman of DAP Pasar Maong Branch. It is indeed an honor. I would also like to congratulate Clarance Chin for being elected as vice chairman, Jessica Wong as secretary, and fellow members who were elected for respective poses. This is an important milestone for members of DAP Pasar Maong branch, it is a reminder for us to work together as a team to achieve our ultimate goals, and that is to serve and fight for the right of the people, state and country. We hope that more young and new blood will join our party as they will be the future leaders for the next generation. Even though it might seems like the darkest day since our Merdeka which happened 60 years ago. However, we see hope in Malaysia, and as long there is hope, there is no reason for us to give up. It’s time for us to wake up and rise as we prepare for the next ‘war’!