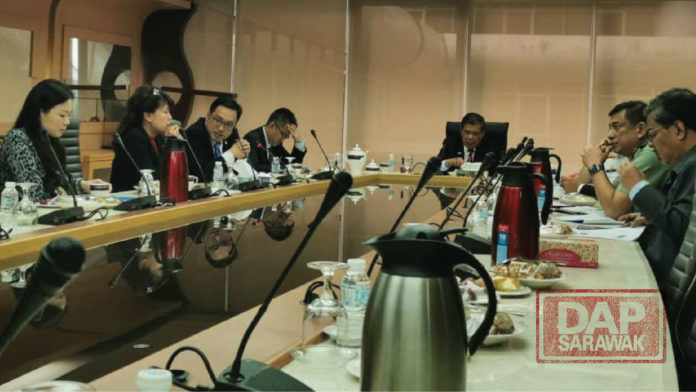 We urge for the multi-agency task force, spearheaded by the Malaysian Maritime Enforcement Agency (MMEA) to intensify efforts under ‘Ops Naga’ to guard the sovereignty of our maritime borders, especially those around Sarawak not just against security threat, but also against the intrusion of illegal fishing boats especially from Vietnam that has affected the local fishing industry.

This are one of the few proposals during our meeting together with YB Kelvin Yii, YB Violet Yong and YBhg Julian Tan in the Ministry Defence with the Minister of Defence YB Mohamad Sabu, Deputy Defence Minister YB Liew Chin Tong, Royal Malaysian Navy Chief Admiral Datuk Mohd Reza Mohd Sany and many other high ranking military officials.

The meeting was a follow up on our efforts to raise the concerns and even security risk faced by us here in Sarawak especially the local fishermen who had been affected by the increasing intrusion of illegal fishing boats into our waters and the stealing of our maritime resources.

It is estimated that our country loses up to RM 7 billion worth of fish and maritime resources annually before due to these foreign fishing vessels trespassing to our waters and using illegal methods to fish and deplete our resources. That is why drastic and effective measure have been taken by the Federal Government in an effort to address this issue.

One of this effort is a multi-agency operation called ‘Ops- Naga’ that started since 2nd May 2019 to catch these illegal fishing boats. Since then we have been informed that up to 80 boats have been seized and their crews arrested. Those nabbed would be charged under Section 15(1)(a) of the Fisheries Act 1985 for trespassing and illegal fishing, Section 6(1)(c) of the Immigration Act for no identification documents and Section 14(3)(b) of the Fisheries Act for falsifying documents.

That is why we urged the Ministry to intensify such efforts especially in the waters around Sarawak to address this issue for the benefit of our local fisherman. The Minister of Defence has given a positive response and also will bring it up in Cabinet to extend the operations as well as intensify it to give greater assurance to our local fisherman.

On top of that, the Minister also committed to discuss this issue with Ministers from other neighbouring countries at the General Border Committee (GBC) that will be held in October to resolve certain issues such as disputed maritime boundaries among our countries, deployment of military joint patrol among other things.

We also proposed other long-term measures that the Ministry can take including incorporating new technologies to help in carrying out their enforcement, on top of increasing and upgrading their current assets. We thus proposed to them to increase all these proper and modern maritime assets including deploying modern scanners and even military surveillance UAV to watch our borders especially in Sarawak and the borders of the South China Sea. This includes advance surveillance technology that employs innovative, integrated and actionable intelligence across all department and agencies to create a Maritime Domain Awareness to better monitor our maritime borders.

This is important as many of these illegal trawlers and fishing boats are getting more high tech in order to avoid detection as well.

We will continue to follow up on this issue and hope that a long term solution can be sort out amicably between the Malaysian and even the neighbouring countries that will not just benefit and security of our people, but also for the interest of the local fisherman industry that will help propel our economy forward.