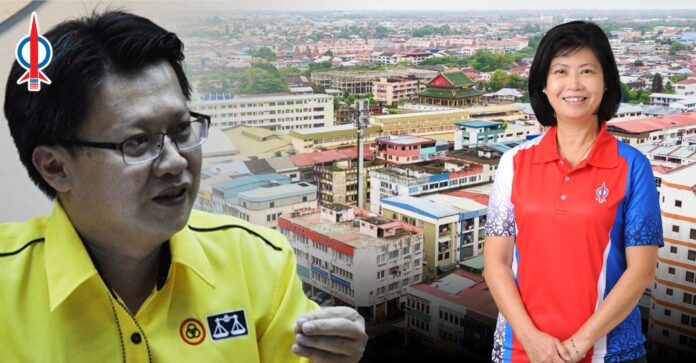 I am responding to Joseph Chieng’s accusation against me that I do not know the regional problems in Bukit Assek and that I did not fly to Kuala Lumpur to ask the federal government for assistance to resolve these problems.

Regarding the first accusation, I invite him to speak to his SMC chairman, Mr Clarence Ting and to ask him if, during the past few years, I had been regularly contacting him on the local issues and to try to resolve these problems. I also invite him to go through my Facebook postings to check out my activities which I had posted online as an accountability to the people of my service to them.

I further invite him to go and read the Hansard on the DUN sittings and check it out if I had been consistently and regularly speaking up on Bukit Assek matters and whether they revealed if I know the regional issues in Bukit Assek.

I also like to ask Councillor Joseph Chieng if he knows that the jurisdiction of the federal government and state government are different and that the local issues concerning roads, drains, littering, flooding in Bukit Assek and so forth fall under the jurisdiction of the local government to which funds have already been allocated for such purpose? Given the fact, he should know that federal funds would not and cannot be used for state projects of which state funds have already been allocated.

And I want to ask Joseph Chieng on what basis could I fly to Kuala Lumpur to ask Baru Bian to rebuild Bukit Assek? Baru Bian, when he was a federal minister was a minister in charge of Works and which only dealt with federal works and not state works. The infrastructure and road problems in Bukit Assek are all state works, under the jurisdiction of SMC. And the authority to deal with these problems lies squarely in the hands of the local government.

And I am sure that he knows that the local government namely Sibu Municipal Council falls under the jurisdiction of the State government, namely under the Ministry of Local government and Housing and which was headed for 5 years by his SUPP president, Dr Sim Hui Kian?

I want to ask Joseph Chieng too, does he also know that my husband and I are different people and that just because he was a state assemblyperson for 3 terms and that me, for 1 term, does not mean that I have been a state assembly person for 20 years? If I follow his logic, then should I also equate him to having served for at least 30 years because of his father?

And should I ask him that since SUPP has been in GPS and before this, BN for 58 years, then why has SUPP still fail to bring resolve the drainage, flooding and road problems in not only Bukit Assek but also in Sibu? They, through the then BN Visionary Team promised to elevate Sibu to a city status in 2005, then again in 2010 and in 2015 and now in 2030. And we are still waiting.

And talking about receiving complaints from the people of Bukit Assek, I like to assure Joseph Chieng that I too have received many and resolved many too.

Again, maybe he should check with his SMC chairman on this. I agree with Joseph Chieng that as a councillor, his power and authority is limited. But if even with this limited power and authority, many problems like rubbish and littering in Bukit Assek and clogged drains which people constantly complained have not been dug and serviced for years, could have been resolved. But they were not. So, he should ask himself why have they still not been resolved?

If he wants to point to the Development Plan as the answer to resolve these problems, I want to ask him should he not, as a councillor, promise the people that he would make sure that the development plan would be implemented for the sake of the people, even if he were not elected in?

He should not hold the Bukit Assek voters to ransom by imparting the idea that there would only be development if he were voted in. Perhaps he should take a cue from his SMC chairman who is on record in his facebook to say that PSB should not use “the city status as a carrot at every election since 2000”. On the same note, Joseph Chieng should not use the development plan as a carrot to persuade people to vote for him especially when it is the government’s responsibility to develop Bukit Assek and Sibu even if they did not vote for him.

I am also perplexed that he had, from time to time, accused DAP of not resolving these State issue problems and bringing development to Bukit Assek.

I want to ask him if he knows the respective role of government and opposition. Does he know that the physical responsibility of resolving State issue problems and bringing development lies in the hands of the government as they hold the taxpayers’ money for this purpose?

However, in spite of having not a single cent of taxpayers money in our hands, we in State DAP have never shirked any responsibility as we have, very often, resolved as many issues and problems of the people of not only in Bukit Assek, but also from other constituencies.

I would also like Joseph Chieng to know that in spite of being in the opposition, I was appointed in 2018 by his own GPS ministers in the cabinet to sit in the MA63 Consultative committee and which role was to advise the Chief minister on the direction of negotiation for the return of Sarawak rights from federal government.

I am sure that unless Joseph Chieng is questioning the wisdom of his GPS leaders, especially that of the Chief Minister, he would appreciate the fact that this is a testimony of the Chief minister’s recognition that I am able to contribute to the negotiation concerning MA63. I welcome him to check out the Hansard on this.

I therefore urge Joseph Chieng not to make remarks which may confuse and mislead people on the truth of the matter. In fact, I have been sent a few of his videos which contain remarks and which may be construed as defamatory of me. I also remind Joseph Chieng , despite it being campaign period, all candidates should do their own homework, and not mislead the people when there is no basis for it, and all should respect each other.