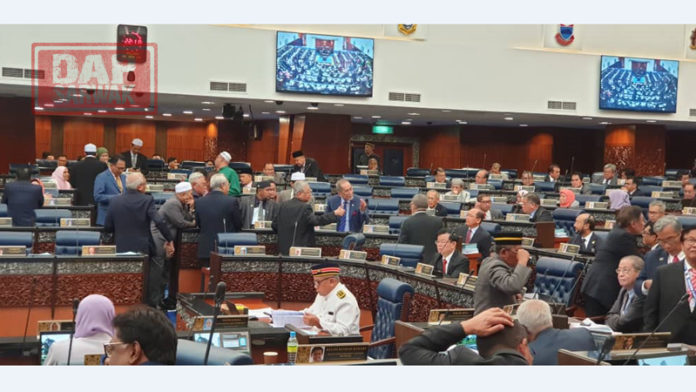 It was from the beginning that the Pakatan Harapan federal government has shown our intention to restore the rightful status of Sabah and Sarawak and recognise us as founding members in the Federation. This sincerity was shown by not only amending the words to the amendment to the exact wordings of the constitution in 1963 based on the spirit of MA63 to remove any doubts or misinterpretation of the amendments, but also to take the risk of tabling a constitutional amendment in parliament even though we do not have 2/3 majority in the House.

I listened carefully to all the debates and arguments even those from the opposition as this is an important issue that is close to my heart. The main concerns expressed by the opposition is that the amendments is ‘cosmetics’ in nature and do not express the full aspirations of Sarawakians to restore others rights including greater autonomy, our rights to our natural resources and also equitable development. This are important matters, important rights that needs to be restored, however such discussions will involve other article and provisions either in the federal constitution or other laws that was passed under the previous administration.

The tabling of amendments of Article 1(2) was never meant to address all the issues and problems that we face in Sabah and Sarawak. Not 1 amendment can solve it all as over the years, multiple amendments were made, multiple laws were being passed that were unfair to Sarawak, and all these are under discussion under high-level Special Cabinet Committee which consist of the Chief Minister of both the State Government of Sabah and Sarawak and their representatives. This committee also consist of the AG of each State and the federal AG, other legal minds, academicians and even activist from both political divides.

With this high-level committee already set up, and all those discussion on going, there is no reason or any excuse for the Bill to be delayed or even referred to a Parliament Select Committee that basically only consist of politicians that may not fully understand all the legal implications in the discussion. Even in the rounding up speech by the Prime Minister, he confirmed that all the concerns raised on other rights and autonomy is currently being discussed in the Special Cabinet Committee and not been cast aside.

So, the topic at hand is the amendments of Article 1(2) at first where the spirit of it is to affirm the rightful status of Sabah and Sarawak in the Federation. The intention was to restore us back to our rightful status, and to correct the wrong that was done in 1976 where we were downgraded to one of the 13 states in Malaysia. This is an important first step, not just cosmetics as it restores us to the original words and spirit of the Malaysian Agreement 1963 as envisioned by our forefathers and with that, we approach further discussion on a new status and platform as founding fathers in the federation.

That is why this is indeed a miss chance as today we all had the opportunity to put our names in history to right the wrong that was done to Sabah and Sarawak since 1976. The federal government had shown their sincerity by taking all the steps and even took the risk to table it in parliament even though we didn’t have the numbers. However, it is disappointing that egos and political affiliation cannot be put aside even though it involves the interest of our nation.