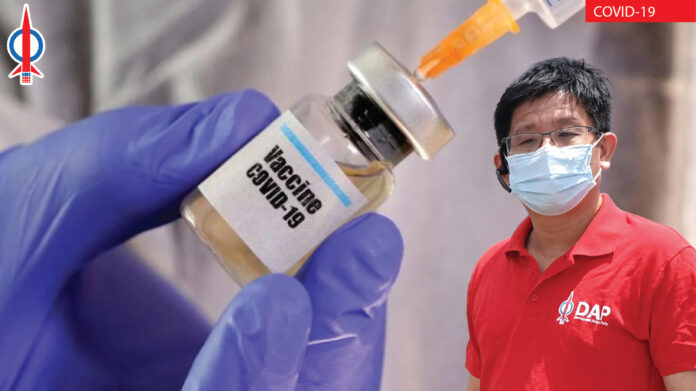 GPS should immediately stop PN government’s move to use funds from the National Trust Fund (KWAN) to procure Covid-19 vaccines and any related expenses. KWAN is a savings fund collected from the harvesting of the country’s natural resources. So far, all of the funds come from Petronas and had assets worth more than RM17 billion. It is a reserved main for our future generations. The government did not touch the fund even during the 1998 Asian Financial Crisis and the 2008 Global Financial Crisis.

Sarawak, as one of the major producers of oil, contributes a significant portion of the reserves. GPS should exercise their often brag about ‘King’s maker’ status and stop the irresponsible use of KWAN’s  money. Money which meant to be strategic cash reserves, especially when the oil resources are depleted.

We have to safeguard Sarawakians’ interest, especially with the political power that is vested in us. Put it into action, and pressure the PN government to immediately reconvene Parliament to allow a parliamentary oversight over the use of KWAN, and among others, restoration of Sarawak status and autonomy.

The PN government is using emergency powers, without the need of the approval of Parliament, to approved amendments to the National Trust Fund (KWAN) Act 1988 (Act 339) and allowing them to use the fund for COVID19 related expenditure.

As an equal partner with ‘King’s maker’ status, why are we not questioning the usage of the previous Parliament approved RM3 billion?  According to the PN government, is more than enough to vaccinate 83% of Malaysia?

PN government increased the figure since then to 5 billion without going through the Parliament. Has the vaccine price increase so dramatically? Perhaps it is due to the pandemic that there is a sudden 66% hike in Malaysia’s population from 33 million to 55millions relative to the amount increased?  Even now, the 5 billion is not enough, and PN government needs to tap into the 17 billion worth of National Trust Fund (KWAN)?

Is the GPS government with its so-called ‘Kings maker’ status going to let this pass without proper ‘black and white’ record within the four walls of Parliament? Sarawakian has the right to know who will benefit from the 5 billion and the newfound access of the 17billion worth of KWAN’s trust fund.

No amount of debate on the definition of ‘wilayah’ or mere talking on ‘autonomy’ will change anything. The only way to do it is via Parliament and through the amendment to the constitution of Malaysia to restore the equal status of Sabah and Sarawak. This has been proven for the past 60yrs. Under the rule of GPS then BN, Sarawak right has only diminished and we are still one of the 13 states.  The question is, are we the toothless roaring lion or ‘King’s maker’?

During PH government time, we have done our part. Within one year in power, we immediately put in an amendment to the Constitution of Malaysia to restore the status of Sabah and Sarawak according to the original content of the Malaysia Agreement that was signed in 1963. Only to be rejected by GPS; thus, Sarawak status remains until now, one of the 13 states.