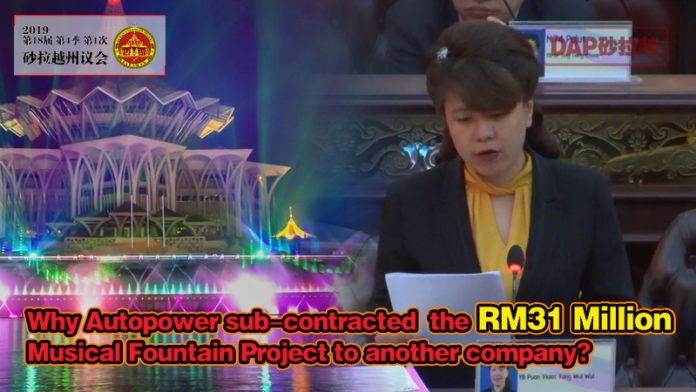 Violet Yong – Debate on motion of Thanks To The Address of Tuan Yang Terutama Delivered in August House on 29th APRIL, 2019

In the last DUN sitting, I have pointed out that Auto Power Consultants (M) Sdn Bhd is not a company specializing in constructing musical fountain project.

Today, in my second episode on the Musical Fountain issues, I wish to further enlighten this August House that, I have found out that Auto Power Consultants (M) Sdn Bhd did not construct the fountain project though payment was paid to Auto Power though DBKU. Instead, they sub-contracted the project to another company called JUMSAR (SARAWAK) SDN BHD. Do you smell something fishy? But disappointedly, our GPS government thinks it is alright for such practice to take place.

During the last DUN sitting, Honourable Minister in the Chief Minister Office (Integrity and Ombudsman) disdainfully responded that this musical fountain was so complex and needed specialized expertise to construct it and that’s why it was proper to award to Auto Power and RM31 million is not overvalued. Today, the truth is out. I would like to ask the Honourable Minister who is also the Honourable from Jepak, do you still stand by what you said? Or was it just a cover-up statement?

According to the business search, the business nature of Jumsar Sarawak is also a company not specializing in construction of musical fountain. It is an ordinary company supplying Industrial equipment, parts and accessories and general contract works.

Given these revelations, I would like to ask and I am sure that the people of Sarawak want to know as well, how much was it that Auto-Power sub-contracted it to Jumsar Sarawak? Why did the Honourable Minister refused to disclose all this information to this August House when I questioned him in the last DUN sitting? Why Sarawak GPS allows Auto Power to sub-contract it to JUMSAR SARAWAK? I can easily conclude by saying that Sarawak GPS government is not truthful in this RM31 million musical fountain dealing. And I wish to put on record that, whatever I had requested from the Honourable Minister particularly, the design specification, the bill of quantity and all relevant documents concerning the musical fountain, all still not given to me until now. What is there to hide? I want to remind the Sarawak GPS Government, the more you want to hide, the deeper I will dig.

I am upset and I believe many Sarawakians also share the same sentiment as me over Sarawak GPS government ‘throwing’ away RM31 million to construct a fountain that is over-valued and not durable.