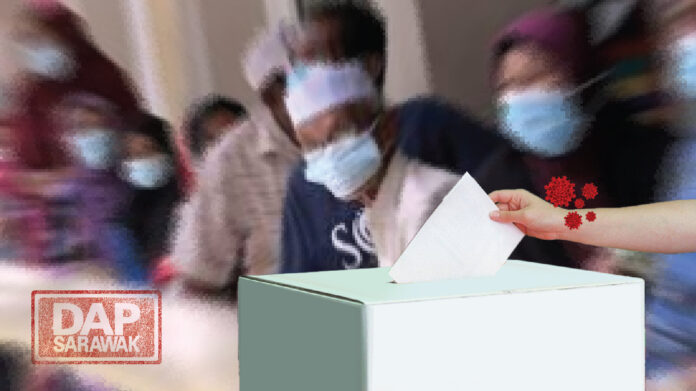 The last day to hold the 12th Sarawak state election is on the 5th of August 2021. This is because the 18th Sarawak State Legislative Assembly first sat on the 7th of June 2016 and will automatically be dissolved on the 7th of June 2021 if not dissolved earlier, upon which an election must be called within 60days. Given this Sarawak still have plenty of time, around 10 months, for the pandemic to subside or to be in a better position before we decide to go to the poll.

Why should we then risk Sarawakian’s lives unnecessarily with the looming COVID-19 third wave, which will be more challenging than the last two? In the science of pandemic such as COVID-19, while the subsequent wave was slow to come, once it hit, it is harder to curb as the virus would have been adapted as it will be armed with the new strain. Such is the case with the current third wave, two largest contributors of cases – the Benteng LD cluster in Sabah and Kedah’s Tembok cluster, where the Institute of Medical Research (IMR) detected the D614G-type mutation in the virus samples, D614G found to be 10 times more infectious than the strain currently circulating.

It is an irony that SUPP’s president Datuk Seri DR Sim also singing the same tune, mull over having earlier state election given his latest statement mentioned that with 4000+ hospital bed in Sarawak versus 5000+ beds in Sabah, the state will not have the resources to combat yet another uncontained outbreak. Experts have warned that Sabah’s healthcare system is at risk of collapse and being stretched to its limit in the next few weeks should the number Covid-19 cases continue to soar, with currently 72% of its Intensive Care Unit (ICU) beds currently in use. It is worthy to note that the current situation in Sarawak in terms of new infection cases consistency is worse if compared to the time when Sabah State Assembly was dissolved. In the case of Sabah, it was single-digit new infection cases with many days of zero infection cases before the dissolution.

If the state election were to be called now, the Election Commission (EC) would need vast support in terms of human resources to carry out the election, which can also involve personals from outside the state. It will not be that straight forward as how the Chief Minister of Sarawak Abang Johari put it “…it’s the problem of Sarawakians, not outsiders. Who asked people outside of Sarawak to come here?”. Is that the risk we are willing to take?

Hence with near 10months to go to call for an election, why then is the rush? This is also against the spirit of democracy and the right of all Sarawakians to vote because, with the strict implementation of SOPs and immigration controls during the election, many rightful Sarawakians who are working and studying in other parts of Malaysia will not be able to come back to Sarawak to vote. In fact, the percentage turnout may be low as people will not feel safe to go out to vote or to come home to vote. This is what has been observed in Sabah recently concluded state election where the percentage turnout was less than what was anticipated by the EC. With a low turnout, Sarawakians will not get a fair representation in the state assembly as they will not be able to get their voice heard with the absence of their rightful vote on polling day.

Clearly, GPS mull over having an early election is to leverage on the current COVID-19 pandemic for its political expediency. They should instead channel all the available resources and energy into expediting crucial aids, taking care of the physical and economic well-being of Sarawakians in a critical time like this.