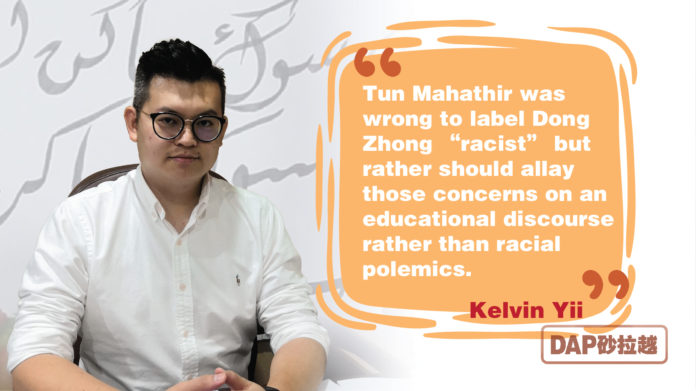 The labelling of Chinese educationist group Dong Zong as racist by Prime Minister Tun Dr Mahathir Mohamad is wrong and most regretted and does not help to allay the concerns raised not just by the association but also the public at large.

That is why I urge the Ministry to properly engage in more dialogues with the relevant stakeholders including Dong Zong, Tamil school educationist and even the public at large to properly allay the concerns of the ‘Khat’ issue to make sure that the discussion is centred on the educational aspects of the issue without dragging in sentiments of race or even religion to further divide the people.

Even though the assertion by Dong Zong that the introduction of Jawi lessons in Standard 4 Bahasa Malaysia is attempts Islamization may not be accurate or paint the correct picture of the initiative, but the concerns raised by them should not be brushed aside as such concerns are not unfounded and possibly represent a large section of the Chinese community on the said issue. That there is dissatisfaction over the matter on the ground is a fact and cannot be taken lightly.

Such dialogue and discussion must be discussed rationally based on education merits and the educational interest of the students rather than drag in the polemics of race or religion or merely dismissing any concerns or dissatisfaction on account of racism.

That is why it is timely that the Finance Minister YB Lim Guan Eng will again bring up the issue in the upcoming ‘Cabinet’ again as we do not want to see such a issue break the social fabric of our country when education is supposed to be the main thing to uplift and bring our nation forward.

While the policy of introducing Jawi was decided by the previous BN government, i hope that all our Pakatan Harapan Ministers from now on will be more alert to the implementation of policies made during the previous era but which are being freshly introduced during the rule of PH.

In such reviews, in PH government should adopt an open and consultative approach so that such policies be discussed with relevant stakeholders before decisions are made to continue their implementation despite their BN origin to make sure such an issue will not rise again. Future policies should also focus on important matters and educational reforms to properly equip our children with knowledge, critical thinking and instil proper values that will be beneficial to build the next generation of our country.