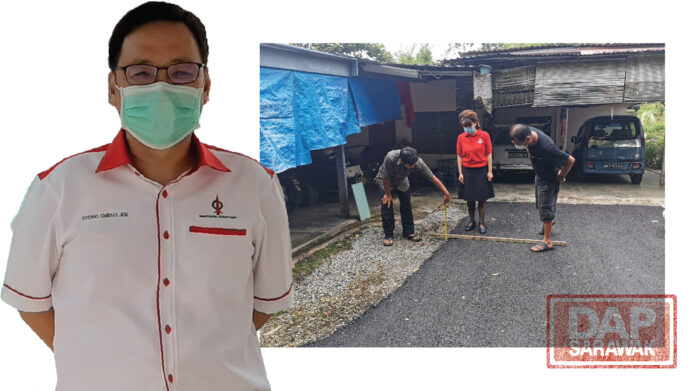 The SUPP should give a full account to the public on the one-inch surface tarring of roads in Batu Kawa area.

In the pamphlet widely distributed by SUPP members in Batu Kawa area, it claims that Dr Sim Kui Hian has successfully applied for RM3.3 million grant of the Project Rakyat fund for the upgrading of 33.8 km of gravel roads in Batu Kawa areas to tarred surface.

Recently, it was exposed by YB Violet Yong that in one of the roads constructed under this project, the tar surface was only as thin as 1 inch. The expose by YB Violet on 11-10-2020 was published on all major local newspapers.

Today is the 6th day after the expose was made and yet, the SUPP Batu Kawa team is dead silent on this expose.

Also, we had never come across any road surfacing specification of one inch. How long can a one-inch tar-surfaced road last?

Given that the SUPP claims that a specific fund has been allocated for a specific length of tar-surfacing, SUPP must account to the people on the following:

The RM3.3 million grant is public fund. It is not private money. Therefore, every Ringgit spent must be properly accounted to the public. The costs of paving one-inch of tar on road and the costs of paving 3 inch of tar is a very different and the durability of the road of one-inch tar surface is also very different from that of a 3-inch tar surface.

While SUPP leader Tan Kai could take the trouble to lodge police report against YB Violet Yong on other aspects of her expose, why did Tan Kai not take the trouble to check whether the people in Batu Kawa have been short-changed with under-rated or inferior quality roads?

As a minister and also the ADUN for the area, Dr Sim also has a duty to carry out investigation on the expose and give a full account to the people on the above 3 questions.