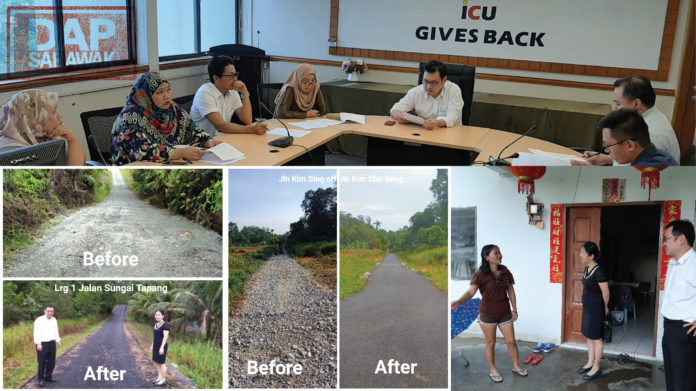 First of all, I would like to thank SUPP for highlighting the “defects” in the 3 projects that were implemented in Batu Kawa area by the Unit Penyelarasan Pelaksanaan Jabatan Perdana Menteri using my MP’s allocation.

As part of the new PakatanHarapan Government, we welcome all criticisms on the implementation of projects using government fund. We also take such criticism seriously.

As such, after my Parliamentary sitting on Wednesday night, I flew back to Kuching and have a meeting with the officers of Unit PenyelarasanPelaksanaan to find out the problem raised. After the meeting, I have also gone to the sites complained of by SUPP to personally check on the matter.

As these involve public fund, I am thus duty-bound to make public the reports and findings.

1) The upgrading work of Jalan Kim Sing off Jalan Kim Choo Seng, Batu Kawa
• Out of the whole 218 metres of road tarred under the project, a 10-metre stretch was found to be wavy.
• The officer reported that the 10-metre stretch was that portion of the road that failed the coring test conducted by UPP upon completion. The contractor was instructed to re-surface that part, but the work was done manually.
• UPP has instructed the contractor to re-surface that 10-metre portion again. Upon my physical inspection on site, the steam roller was there and the second re-surfacing work will be carried out next week.

2) Upgrading work of Jalan Batu Kawa/Bau, Batu Kawa
• SUPP showed a patch of road surface with new tar while the other part was not with uneven surface
• The officer reported that the patch shown by SUPP was not within the job specification part. The upgrading work is only in respect of the lane branching off from the main road which is in the picture shown by the SUPP representative.
• In fact, the road in the picture shown by SUPP is supposed to be maintained by the Majlis PerbandaranPedawan who has neglected their road maintenance duty. As the contractor has extra tar after doing the job under my allocation, he, out of his goodwill try to patch up the bigger potholes on the main road.

3) Upgrading of Lorong 1 Jalan Sg Tapang (near SJK Chung Hua Sg TapangHilir), Batu Kawa
• SUPP showed newly tarred road done half way leaving another part of the road not tarred.
• The officer reported that the whole gravel road is 1 km. There was only fund to do 150 metres. In accordance with the request of the residents, the project focused on that portion of the road which is on a steep slope. Without tarring the road, vehicles travelling up the road have the tendency to skid off the road.
• Given the danger that the gravel road going up the slope posed to the road users, we, at the request of the residents, used the limited fund to prioritise the tarring of that part of the road.
• Again, SUPP’s picture was showing that part of the road that is not within the job scope.
• In fact, the residents informed us that they have requested SUPP to tar the road for more than 5 years, but to no avail. I have also visited the residents in the area and they are happy that at least the new government’s elected representative has acted on their request.

The new Government welcomes all criticism and supervision over the projects undertaken by the contractors appointed by the Unit PenyelarasanPelaksanaan, regardless whether the complaints come from members of the public or SUPP.

However, for the above 3 complaints publicised by SUPP, only the first one is valid though exaggerated. The second and third complaints are in respect of matters not within the work scope. It would be good if, in future, they could verify with my assistant first before embarrassing themselves publicly by barking up the wrong tree.

On a second note, now that the SUPP knows the problem, it should get Majlis PerbandaranPedawan to do immediate repair of the roads. Beside MPP, there is also the SUPP Batu Kawa ADUN. As for YB Sim KuiHian, as an ADUN, he has RM9 million at his disposal every year, not including the Minister’s allocation. Why are there still so many gravel roads in Batu Kawa?