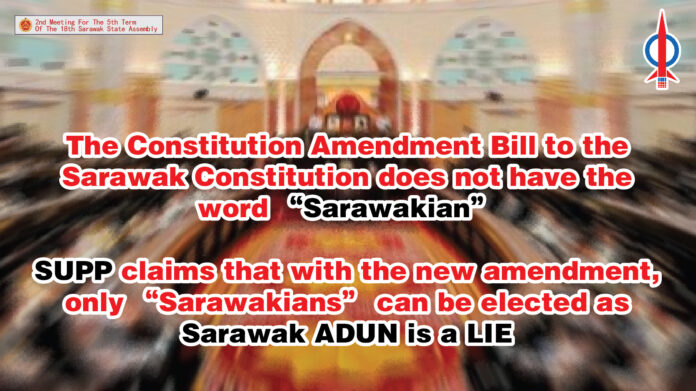 The Constitution Amendment Bill to the Sarawak Constitution tabled by the GPS Government does not have the word “Sarawakian” in it. It is a lie of the SUPP to claim that after the said amendment, only Sarawakian is eligible to be elected as an ADUN.

In the first version of the Amendment Bill, the qualifying word is “resident” according to the Immigration Act. Both DAP and PSB ADUNs objected to the amendment Bill forcing the GPS Government to withdraw the Bill.

In the second version of the Amendment Bill, the qualifying words are “normally resident” in Sarawak and one of the parents is born in Sarawak.

The true fact is, even if a person is born in Sarawak, he may not be a Sarawakian. But with the second version of the Amendment Bill, that Sarawak-born person’s children can be elected as Sarawak ADUN.

With this second version, one clear effect is, the step-children of our Governor are now clearly eligible to be elected as an ADUN of Sarawak. That is not what we Sarawakians want. As such both DAP and PSB ADUNs objected to the Bill.

Outside DUN, the SUPP Chairman claims that with the new amendment, only “Sarawakians” can be elected as Sarawak ADUN. That is a not true.

SUPP and GPS should be truthful and frank to Sarawakian. They are the ones rejecting the use of the word “Sarawakian” as the eligible candidates of Sarawak DUNs.