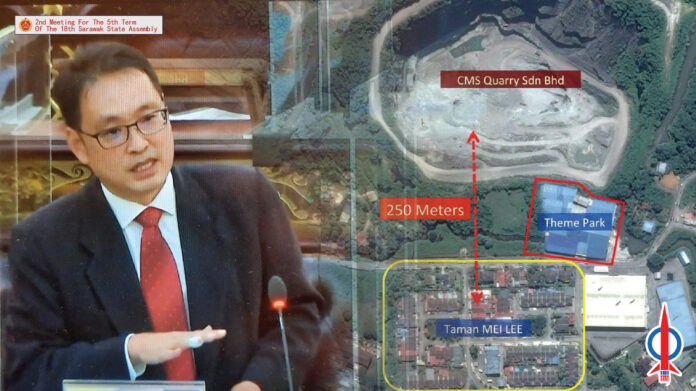 Finally, the residents staying at Taman Mei Lee near 7th Mile Bazaar Kuching can have their peace of mind.

Following years of protests and petitions to the State Government to stop the quarry operation nearby, today, in the Sarawak State Legislative Assembly, Awang Tengah finally gave a clear answer to their request.

Over the years, this matter had been raised many times both in the State Assembly and the Federal Parliament, but as the matter lies within the jurisdiction of the State Government, it could only be pursued at State level. But for years, there was no action by the State Government on the quarry operation.

On 11-11-2020, while debating on the 2021 Sarawak State Budget, I raised the concerns of the residents about the quarry operation near their housing estate, the constant blasting from the quarry that sent shocks and vibrations to their houses and the ultimate worry that such blasting may weaken the strata stability of the quarry walls, thus possibly causing massive landslide in the area.

After years of anxiety, finally the resident can see light of the day and will be able to live their daily lives without the constant blasting and fear of damage to their houses caused by the blasting after 29-11-2020.