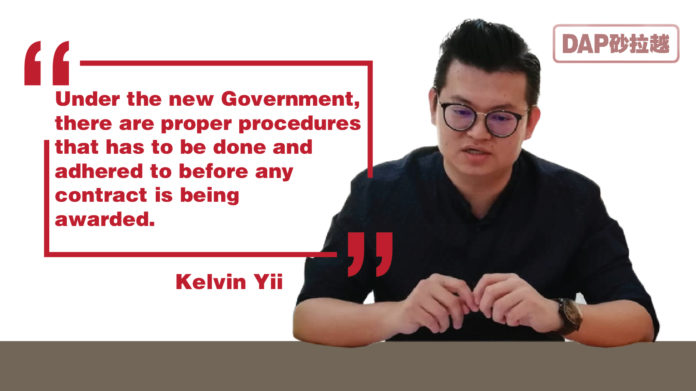 I regret the manner how Chief Minister Abang Johari continuously and deliberately play politics over our education matters and the issue of our dilapidated schools when he igonorantly questioned the alleged delay in the repair works when he is well aware of the agreed terms and mechanism including the need for open tender and proper monitoring of the said implementation.

There were 4 main mechanism that was agreed between the Federal and State Government and one of the important mechanism is that the repair works of the dilapidated schools in Sarawak should be offered by open tender, to ensure transparency and fair value based on the current federal government financial arrangements.

Based on public statements, the State Government made the claims that the initial agreed RM 350 million was paid around 4th August 2019. So today is the 26th August 2019, about 3 weeks from then.

Somehow the CM Abang Jo and the State Government expects all proper procedures including proper open tendering process, transparent selection process among others to be done within this 3 weeks.

Under the new Government, there are proper procedures that has to be done and adhered to before any contract is being awarded. This is the same whatever the amount, including the use of my own constituency funds.

Unless somehow Abang Jo still intends to promote to practice of the old BN government, which he was part of, of direct negotiation running the risk of inflated prices and crony enrichment. Even with that, it will still take more than 3 weeks.

The issue of dilapidated schools is a chronic and inherited issue and did not occur only when the new government took over. So attempts to shift blame to the new government by the present State leaders in my view is hypocritical as they were part of the administration who allowed this rot to happen.

They cannot try to push it to say that education is a Federal thing, as don’t tell me the State Leaders did not realise the issue that is happening in their own backyard all these years and somehow only got vocal in the past year.

Even in the first phase allocation by the previous government in 2017/2018 to repair these schools, it was reported that 77.9% of those projects that used Industrial Building System (IBS) were delayed.

So the issue again, is not just about ‘allocations’, but whether it has been fully and properly utilised for its intended purpose. If there are no steps or conditions(open tender, proper monitoring.. etc) in placed to make sure wastage or corruption do not happen, no matter how much money is allocated, it will still never be enough.

I understand the importance and also the need to expedite this important issue as i myself have continuously debated on this issue in parliament and urged all the relevant parties including the Federal Government and State Government to finalise the necessary arrangements.

I myself will follow up with the relevant department including the Ministry of Education on the status of the project. I believe it should be given priority and expedited for the interest of our students and the good of our community.

But while we push for it to be expedited, it is also important proper mechanism and transparent selection and monitoring is in place before to prevent any risk of corruption or abuse which will then cause more wastage of our public funds.

Again, i regret how this issue has been politicised as the school children will be the ones caught in the political crossfire. So i do welcome the assurance given by the Stae Gov and Federal Gov that they will work together to resolve this long standing issue.