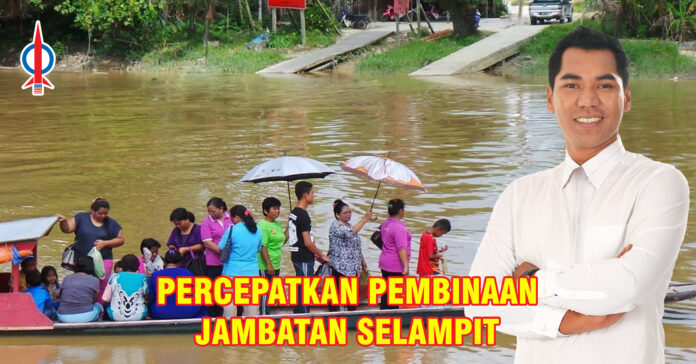 The Selampit Bridge, which has been promised many times in the election, should be given immediate attention by the state government.

The Minister for the Ministry of Rural Development (KPLB) in his reply to me in Parliament on 17 October 2018 stated that RM30 million had been approved by the Federal Government but on 18 November 2021, the Minister stated that the project has not been tendered due to the issue of the settlement application, in which the State Planning Authority (SPA) did not approve the proposed bridge location.

The Public Works Department (JKR) Sarawak as the implementing agency for this project has submitted a siting application for four (4) times to the SPA but it was not approved.

The Ministry is still in the process of resolving the issue, including engaging and holding discussions with the Sarawak Government through the State Implementation Monitoring Unit (SIMU).

I greatly appreciate and am thankful to YB Billy Sujang for his concern and I fully support his statement that the Selampit Bridge should be constructed this year.

Sarawak Deputy Premier, Datuk Amar Douglas Uggah Embas who is also the Minister of Infrastructure and Port Development in his reply to the ADUN for Opar on the status of the project during the winding-up speech at the Sarawak DUN sitting on 26 May 2022, saying that JKR will resubmit the siting application for the construction of the Selampit Bridge to the state government for approval.

Various questions arise as to what transpired during the period of almost 2 years and 5 months between JKR Sarawak, SPA and SIMU. Why was the siting application that had been submitted four (4) times by JKR to SPA not approved? Why was this problem not reported to the elected representatives or the villagers involved, in order to resolve the issue? Where is the engagement process that should have been done to facilitate the project to be executed immediately? Does the Sarawak government intend to delay the project as a bait for the next general election?

For many years, I have been fighting on this issue. The Selampit Bridge construction project is one of the projects that is very close to my heart. My hope, with the construction of this basic infrastructural need, is that it will not only save time, reduce travelling cost and improve the quality of life for the community in the village but it is a means of strengthening inclusivity towards a just society in line with the Sustainable Development Goals (SDGs).